Review of ‘Interrupting the Church’s Flow’ by Al Barrett

Lottie Moore reviews Al Barrett’s recent book at the intersection between practical and political theology—and finds much to recommend.

Al Barrett’s work opens with a description of the Bromford Passion Play of 2013: a community re-enactment of Jesus’ death and resurrection on his estate in Bromford, home to some of the most deprived people in the UK. He evokes a powerful scene where the godforsakenness of the crucified Messiah, performed under the concrete jungle of the M6, seems to mirror the devastating lived experience of its residents. Such a juxtaposition becomes familiar throughout the book: Barrett navigates between dense theology and its practical application with ease and humility. It is somehow entirely feasible that the theologian who writes eloquently about depoliticisation, radical receptivity, and the postmodern turn is the same local vicar who spends his time with some of Britain’s most vulnerable people—ministering to them, talking to them and writing scripts for their theatre group.

A key perspective offered by Barrett (one that is so often missing from current theological reflection) answers the challenge posed by Graham Ward: ‘from where does this theology speak?’ (p. 24). Barrett explains that his White, heterosexual, middle-class status ‘means I come to the task of theological reflection, as well as to the majority of my relationships, with a multiplicity of privileges, of power imbalances tipped in my favour’ (p. 24). He explains that just as he had the choice to live in an economically deprived area, he also has the privilege to leave it at any point.

Indeed, location, both theologically and physically, forms a central theme. As well as situating the particularity of Barrett’s parish in Birmingham within the wider context of poverty, exclusion, and identity, Part One endorses a political theology that seeks to identify the church within the margins. Barrett narrates the way the church has sought do this over the past seventy years. He explains how the likes of William Temple constitute a form of ‘public theology’ which ‘has a strong urge towards building consensus’ (p. 72). He then offers a comprehensive engagement of how liberation theology has manifested itself in the UK, including some of its critics. As with much modern and postmodern theology, the wrestle between the universal and the particular crops up: how can the universal also be particular? How is the particular rooted in the universal without really losing its particularity?

In Part Two, Barrett returns to Graham Ward as his central conversation partner. Ward is one of the original architects of ‘radical orthodoxy’—a postmodern theology that is unapologetically both political and (in some sense of the word) orthodox. The church cannot simply mould itself to be something other than what it is, for ‘the first task of the church is to be (the) church’ (p. 94). Relating Ward’s perspective on the problems of the postmodern city, Barrett begins to critically analyse his solution, which is an erotic ‘one way’—from God, through the church and into the world. Here Barrett finds an unacknowledged ‘masculine, sexist and imperialist logic’ (p. 182). However, instead of rejecting Ward’s work, Barrett pushes it further, offering a solution in the form of ‘radical receptivity’. The church must intentionally ‘open up’, leading to a tension between itself and the other.

Barrett explains this proposal by drawing on the work of Romand Coles. Using Coles as his second principal interlocutor is especially interesting as Coles is not only not a Christian but also a radical political theorist. Taking seriously the thought of those outside the theological realm highlights a real self-awareness that, as mentioned earlier, ripples throughout the book. By engaging with Coles, Barrett is able to draw out Coles’s close connection between theory and practice. He explores several practices of receptivity, all centred around the concept of listening, which ultimately allow for the targeted identity to challenge the dominant one.

Finally, Barrett moves beyond both Ward and Coles to imagine a ‘radically receptive political theology’ (p. 319). Challenging how we both think and act, Barrett argues for distinct ways of engaging receptively with the other, in light of divisions. Barrett concludes by returning to the Bromford Passion Play, heralding it as an early milestone in the development of the theology explored throughout the book. It is in the Firs & Bromford Estate that—despite huge divisions between identities—‘people are discovering and receiving the gifts and challenges of our neighbours’ (p. 382). While its dense language and complex theology prohibits it from being as accessible as the ideas it is proposing, Interrupting the Church’s Flow is a challenging yet thought-provoking book. It offers a remarkably practical theology for 21st century Britain. 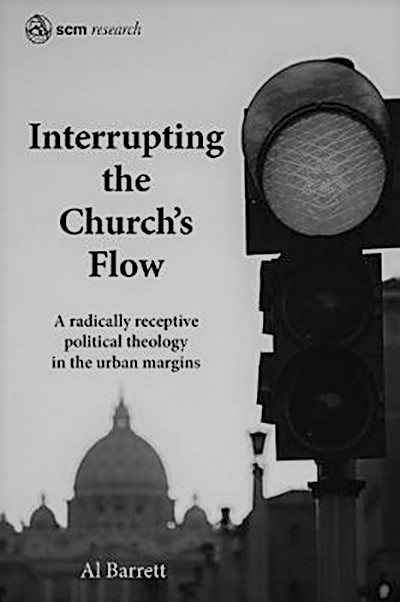