Kenneth Wilkinson-Roberts finds much to recommend in this edited volume on the connections between spirituality and well-being, not least its global and interdisciplinary approach.

In recent years, the study of spirituality and wellbeing has become increasingly popular, especially this year with the struggles and stresses of the COVID-19 pandemic. Academic study of wellbeing and spirituality is, however, surprisingly rare despite its pertinence to key debates.

The relationship between spirituality and secularity is a major theme of this book, particularly in the context of healthcare. This book helps to address this question through bringing together a variety of voices to explore the locations of wellbeing and spirituality in their contexts. For instance, Wendy Dossett’s chapter on spirituality, belief and discipline in Alcoholics Anonymous (AA) discusses tensions surrounding how people place religion within AA, and the implications this can have for the relationship between AA and healthcare. Dossett explains how AA and other Twelve Steps Manual Aid groups classify addiction and recovery in spiritual terms, terming addition as a ‘spiritual malady’ in need of ‘spiritual awakening’ (p. 113). This can be interpreted by AA members and others in a variety of ways, including a relegation of AA to the private realm, outside of the domain of (secular) public health. But it remains the case that the spiritual and religious claims made by AA literature, however members choose to interpret them, is key to the success of the method.

The book also explores insights from around the world, particularly Brazil, with chapters from Bettina Schmidt and Marta Helena de Freitas. De Freitas interviewed Brazilian health professionals and found that most did not engage with religion and spirituality in their work. They also thought that much more work would be needed to integrate religion and spirituality into health and mental health care. Schmidt’s chapter moves in a different direction, comparing narratives of spirituality and wellbeing in Brazil and the UK. This comparison exposes the ethnocentric perception that the West has of Brazilian medicine, as well as the cultural differences between the UK and Brazil, with Brazilian healthcare emphasising the community’s role in wellbeing far more than its British counterpart.

Thomas Jansen’s chapter on food, self-sacrifice and spiritual practice in Chinese Buddhism moves away from the spirituality and secularity debate, to comment on the interrelationship between bodily nourishment, spirituality and wellbeing in Chinese religion, using the legend of Miaoshan (p. 88). In this chapter, Jansen argues that themes of spiritual aspiration, physicality, social engagement and motherhood found in the legend of Miaoshan were central to the Chinese understanding of wellbeing. The legend also challenges western, centralised and goal-orientated images of wellbeing in favour of a wellbeing that is process-based, relational and diverse (pp. 108-9).

The chapters in Spirituality and Wellbeing not only explore these topics from a mixture of religious and cultural contexts, but also using a range of methods and disciplines: this book offers a mixture of healthcare focused chapters as well as theological contributions. They also shift from focussing on healthcare professionals, to patients and spirituality practitioners, to scriptural and academic contributions. In particular, Louise Spiers’s chapter on autoethnography, epilepsy and spirituality highlights the insights that can be gained from the autoethnographic method, arguing that it can challenge medical responses to epileptiform events and offers a more authentic and accurate understanding of spirituality and wellbeing in the context of epilepsy. This chapter especially highlights the importance of interdisciplinary and interfaith work in the study of spirituality, wellbeing and religion, a theme which runs throughout the book, as well as the importance of diverse methodologies in this field.

This book is an excellent contribution to debates surrounding spirituality, religion and wellbeing, and would be a brilliant resource for both those studying these topics and those generally interested in this field. The book is accessible, rich, diverse and interesting, with chapters filled with questions, and with ideas which challenge traditional Western narratives about the location and nature of the religious, paranormal and spiritual in wellbeing and healthcare. 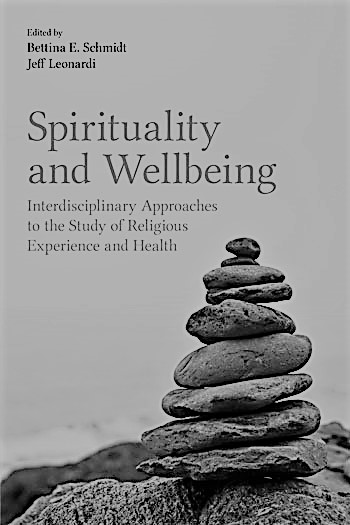