To bury or to praise?

John Reader responds to our recent seminar on ‘Spaces of Trust’ and warns of the dangers of binaries in a digital age.

‘I come to bury Caesar not to praise him’. So says Mark Anthony at the start of his funeral oration to Caesar—according to Shakespeare. Anthony, of course, was dissembling and playing on the emotions of those present to do exactly the opposite of his stated intention: to stir up the crowds and justify violent action against the perpetrators of the assassination.

But at the recent Foundation webinar on ‘Spaces of Trust’, the presentations on the role of ‘the digital’ correctly attempted to steer a path between either burying or praising the technology. One of the themes emerging from the webinar was the control of the language being deployed to describe the digital and to be able to challenge that from within religious sources. Both speakers talked about binaries: Eric Trozzo an apocalyptic binary in US politics leading to a sense of threat encouraging extreme responses or a resigned inertia; and Beth Singler about the binary in the language used to talk about Artificial Intelligence, where it is described as either good or evil—helpful robots or scary monsters.

In both instances, one objective would be to see if and how alternative metaphors, or language more generally, could provide a more nuanced and balanced public space in which to conduct debates about the digital. Trozzo referred to Catherine Keller’s counter apocalyptic and the opaque glory in the excess of the incalculable: that which remains beyond articulation as encountered in ritual for instance. Trozzo was advocating that we attend to the apophatic in Christian discourse—what Keller refers to as ‘the cloud rather than the crowd’. Singler, on the other hand, urged us to try to expose ‘the wizard behind the curtain’, to reveal the human agencies at work beneath both conspiracy theories and the operation of algorithms. The magic needs to be demystified, she said.

So, are we about to bury Caesar (the digital) behind the veil or to bring him (the digital) back to life as just another fallible human with dubious political motives?

One of the problems is that the debate itself is being conducted through the digital technology. Who speaks for whom and with what authority in this medium? The objective of the webinar, and possible subsequent ones, is to open spaces for debate in what is hopefully a trustworthy and reliable digital location, but the medium has its limitations. Engaging with high-quality presentations remotely and with limited time available is a challenge in itself. Much that might be said and reflected upon in a more relaxed and physically present setting tends to be lost in a focussed present where opportunities to comment and discuss are reduced to the instant and then probably lost. This, I would suggest, contributes to creating the very binaries that both speakers pointed to. Debate and discussion, let alone description, are reduced to simple and sharp points and responses that can be communicated effectively through this highly controlled medium.

I fear the same for matters of faith and practice, which are also now increasingly mediated through the digital and reduced to the readily articulable and accessible in a matter of moments. This makes it so much easier to create those binaries or polarities that both speakers referred to, and that is exactly what I fear politicians are deliberately trying to do through their use of the digital. It is much easier to manipulate the crowds and their reactions by appealing to emotional responses in the moment, as Mark Anthony was doing, when there is such limited opportunity for real debate and open feedback.

Helpful robots or scary monsters. Good or evil. My concern is that religious approaches to the digital can fall into the trap of these binary logics: the technology is either ‘faith-washed’ or else becomes a kind of scapegoat. And both of these polarised positions are so much easier to communicate through the digital itself, where the language and imagery is controlled by whichever wizard is behind the curtain, than when one has to present an argument face-to-face in an open forum.

Which brings us back to the intention of the webinars of trying to create a space of trust in which these debates can take place. The digital itself, as with all technology, shapes what becomes possible, and those who have grasped this first then use it to their advantage. How to counter this by using the digital becomes a major challenge. A simple appeal to an external authority is compromised when anyone can access anything through the internet, for instance, and in this apparent anarchy those who shout loudest or longest gain the best hearing.

Is it possible, even in restricted faith circles, to construct some form of order or discipline where boundaries can be recognised and agreed? Are the alternative metaphors found in ritual, worship and the physical spaces believers inhabit enough to counter subversive influences? The control of both space and time are surely critical if this is to be the case. The instant and immediate, which enable emotional manipulation, must be expanded into the extended and spacious to enable more measured and nuanced discussion of the impacts of digital technology, both positive and negative. Keeping the references circulating and preventing the premature closure of debates seems essential to this. Each contribution is only a beginning, or staging post on a journey, rather than a destination itself. What religious metaphors might lend themselves to this process? Pilgrimage perhaps? Moving out into the wilderness? Death and resurrection? 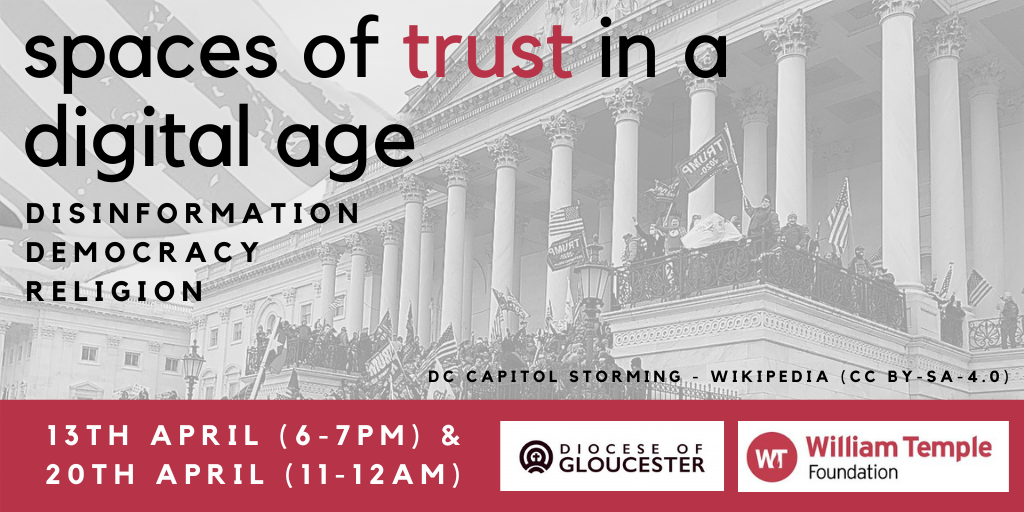