Building a Politics of Hope: A fascinating & inspiring event 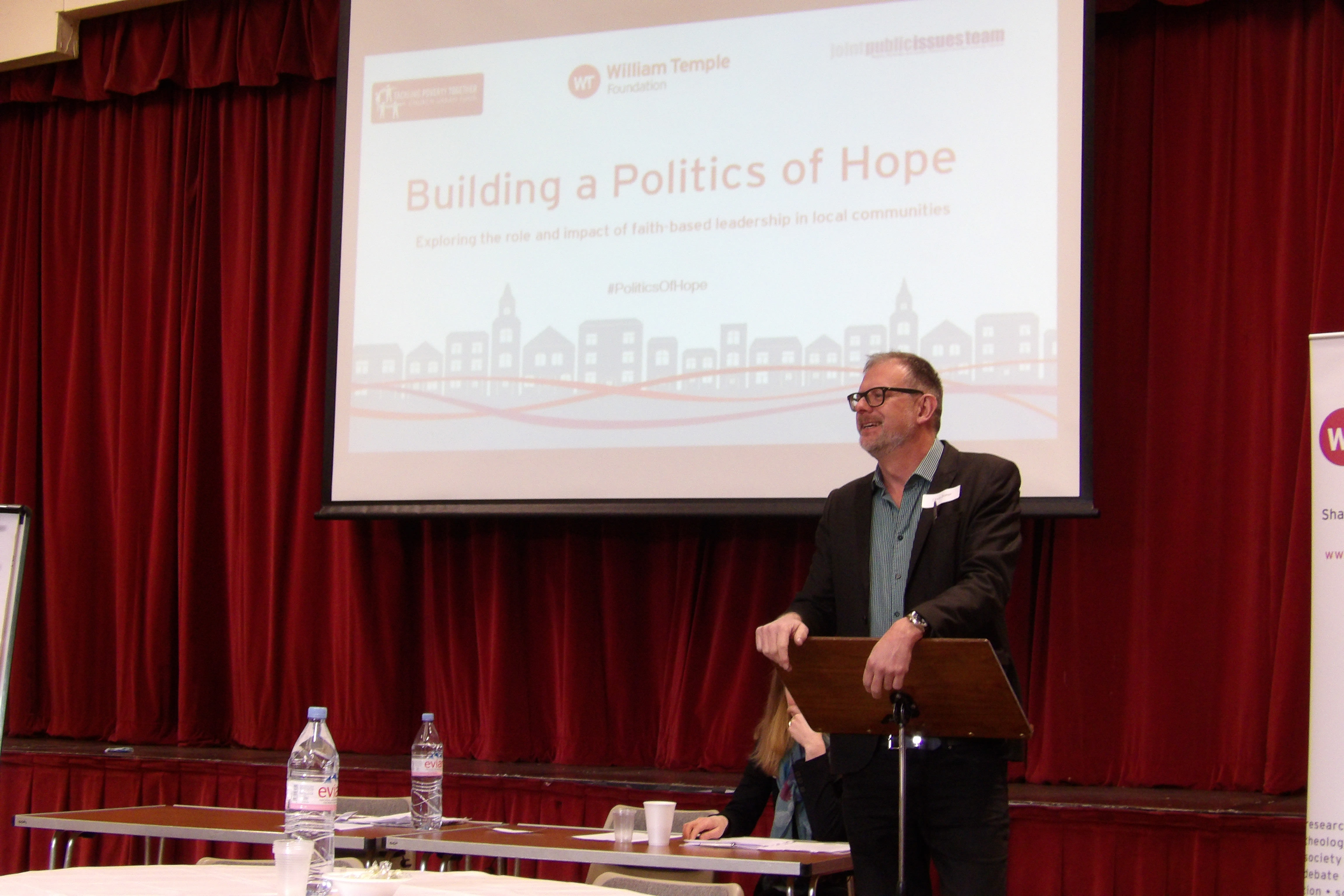 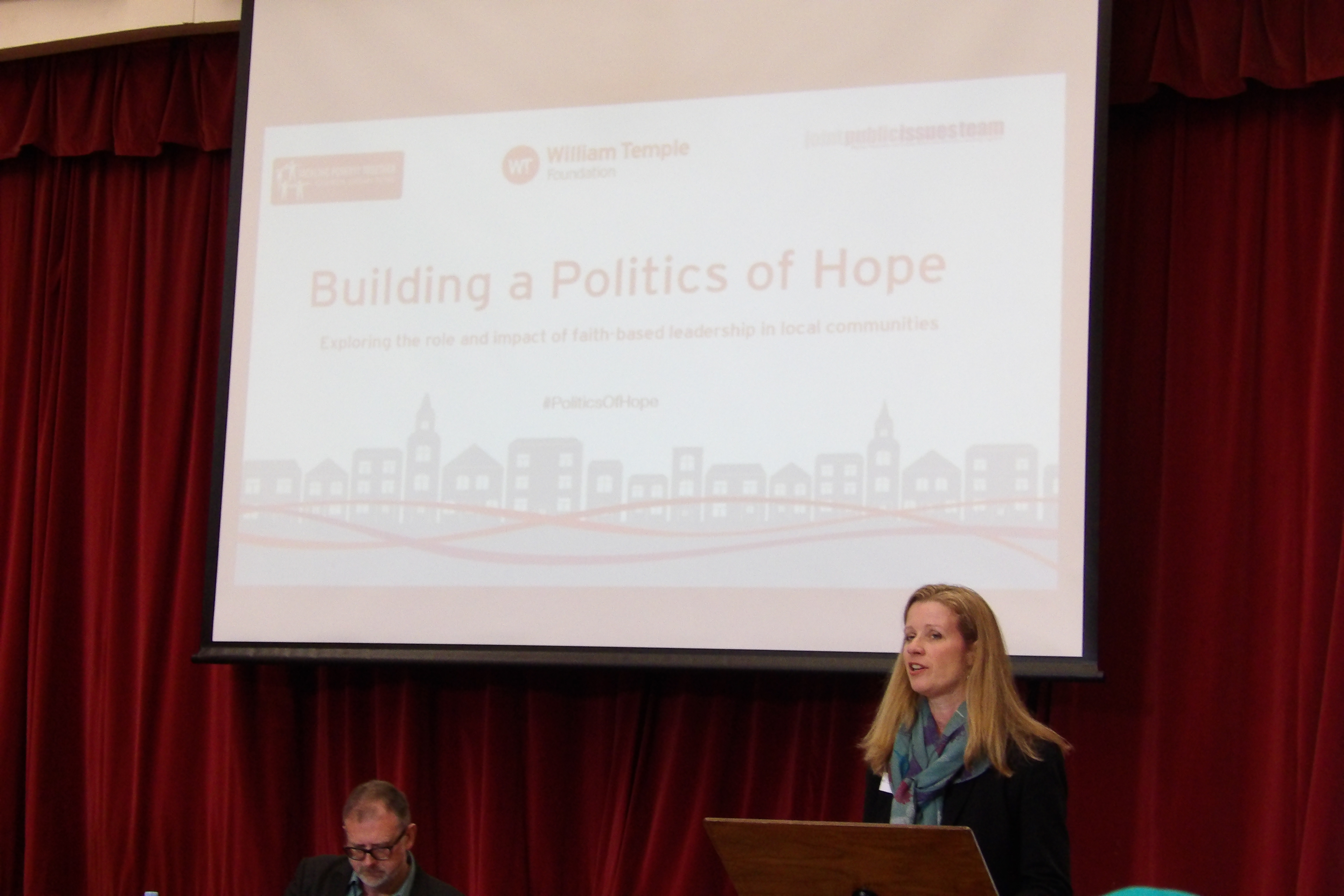 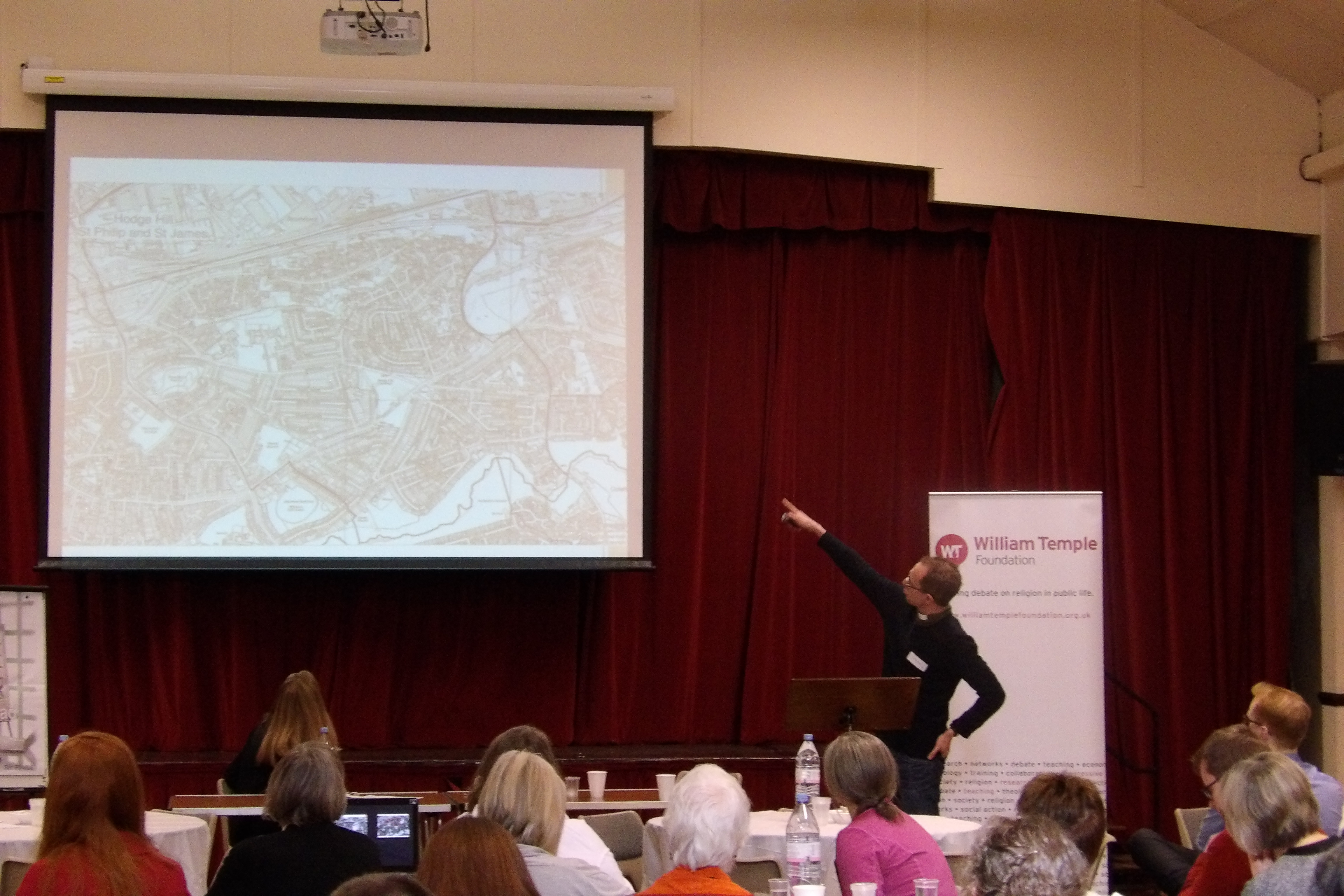 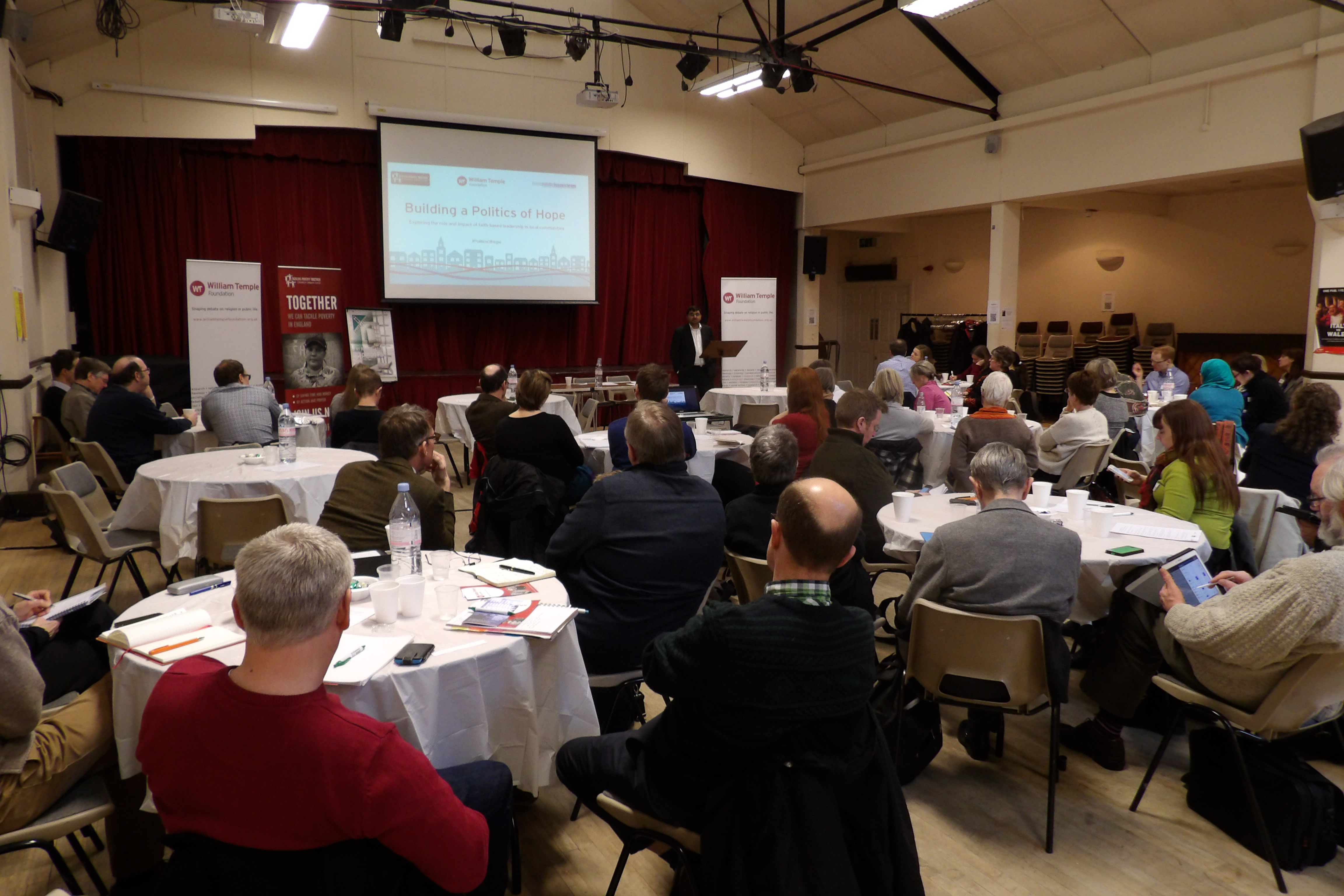 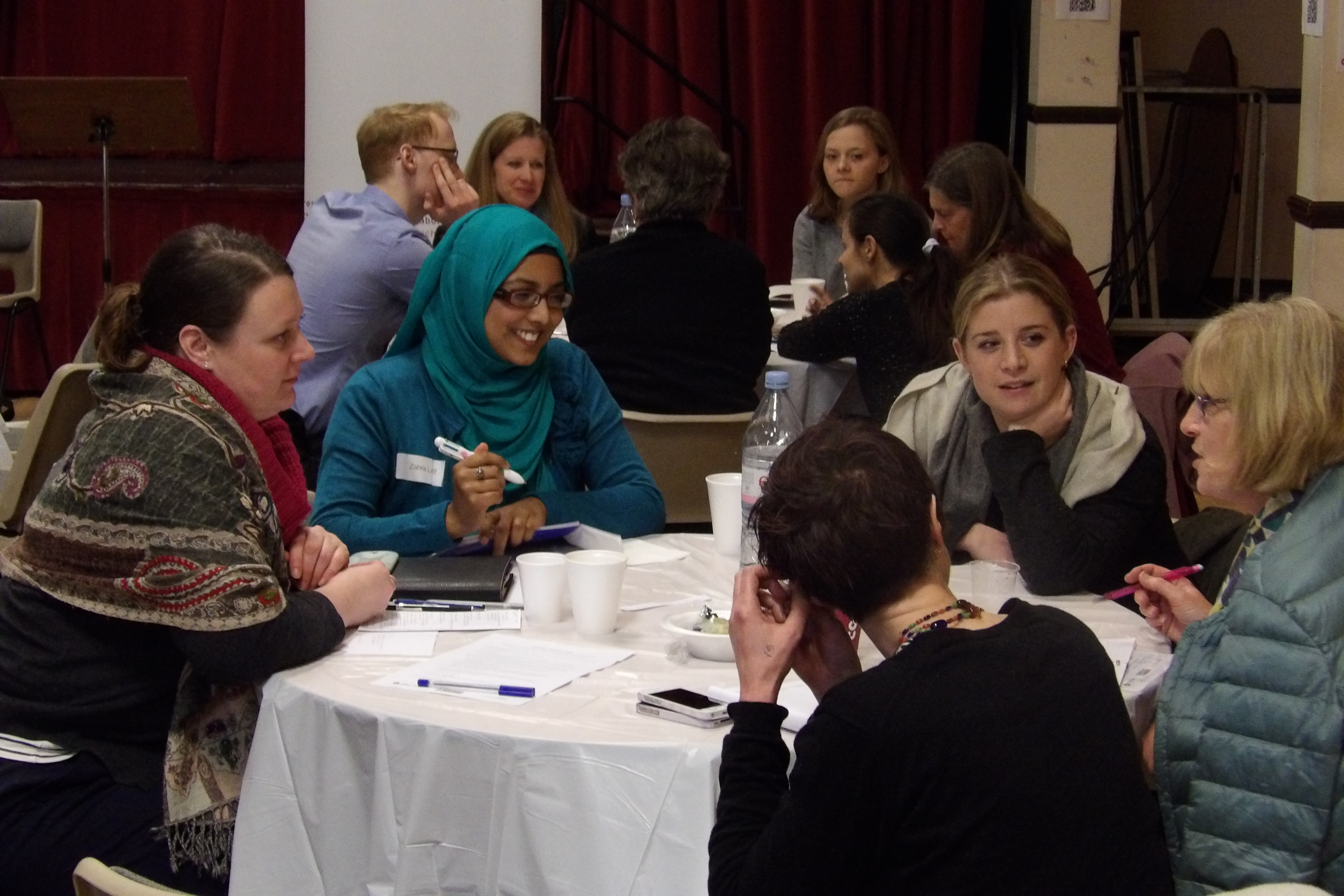 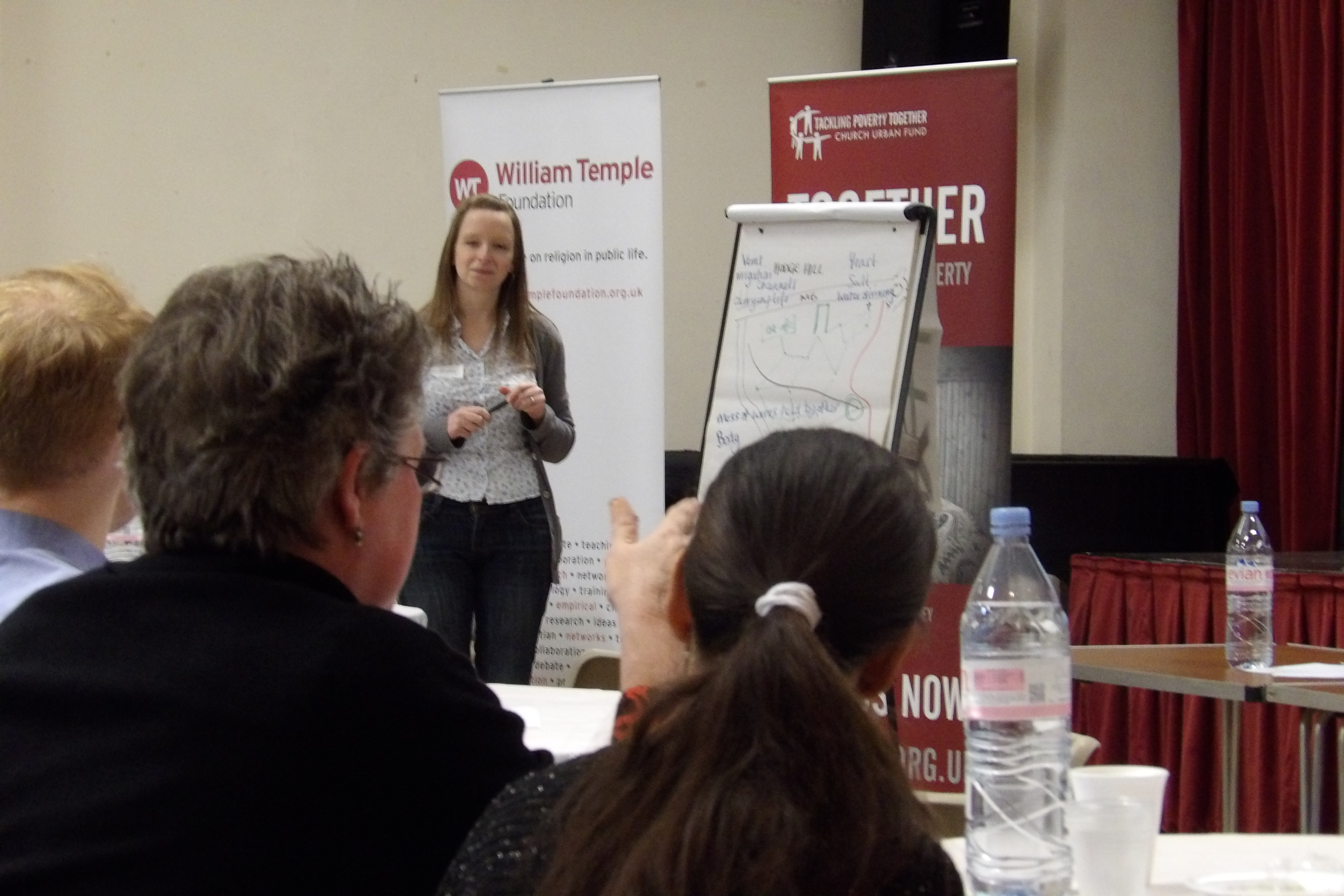 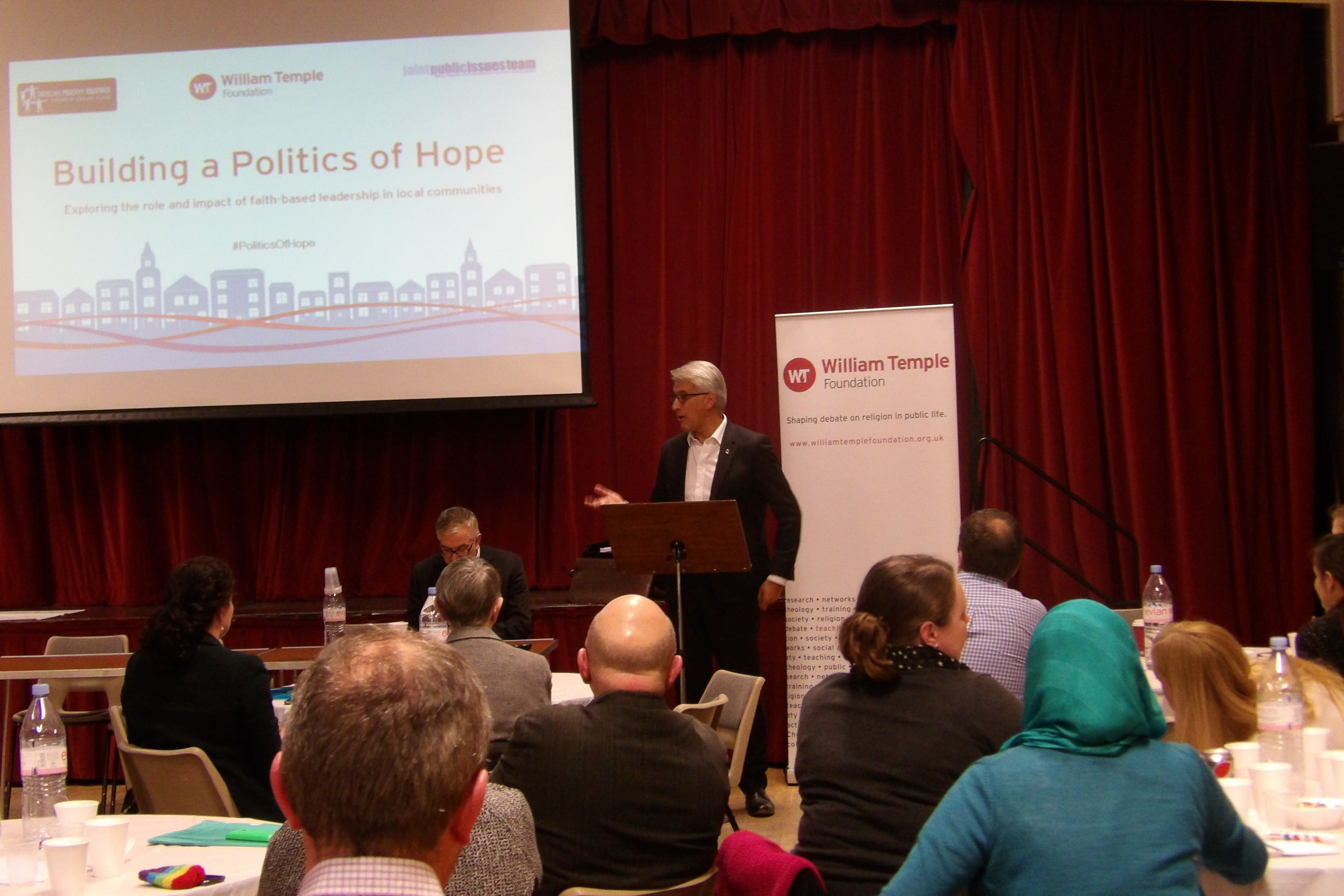 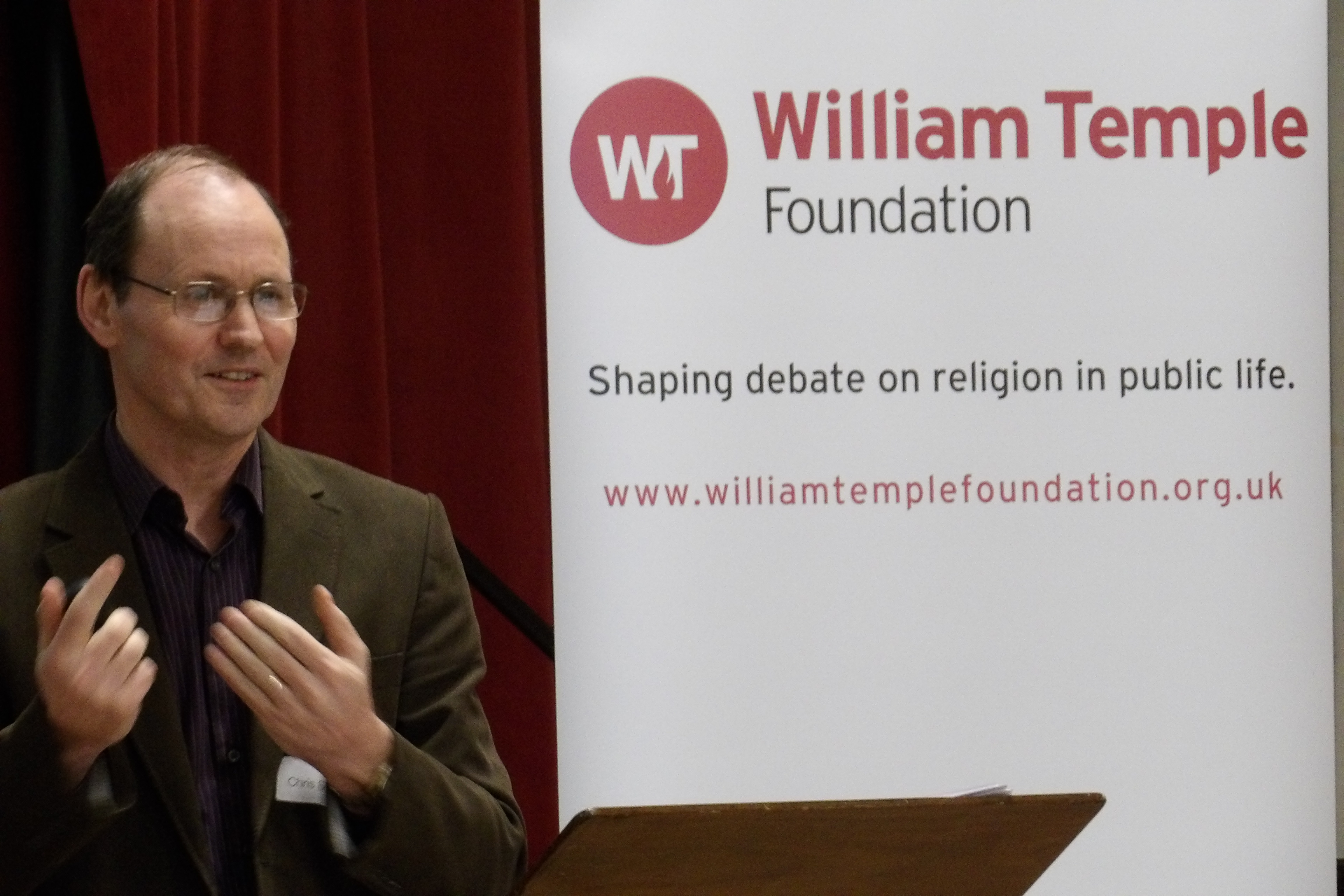 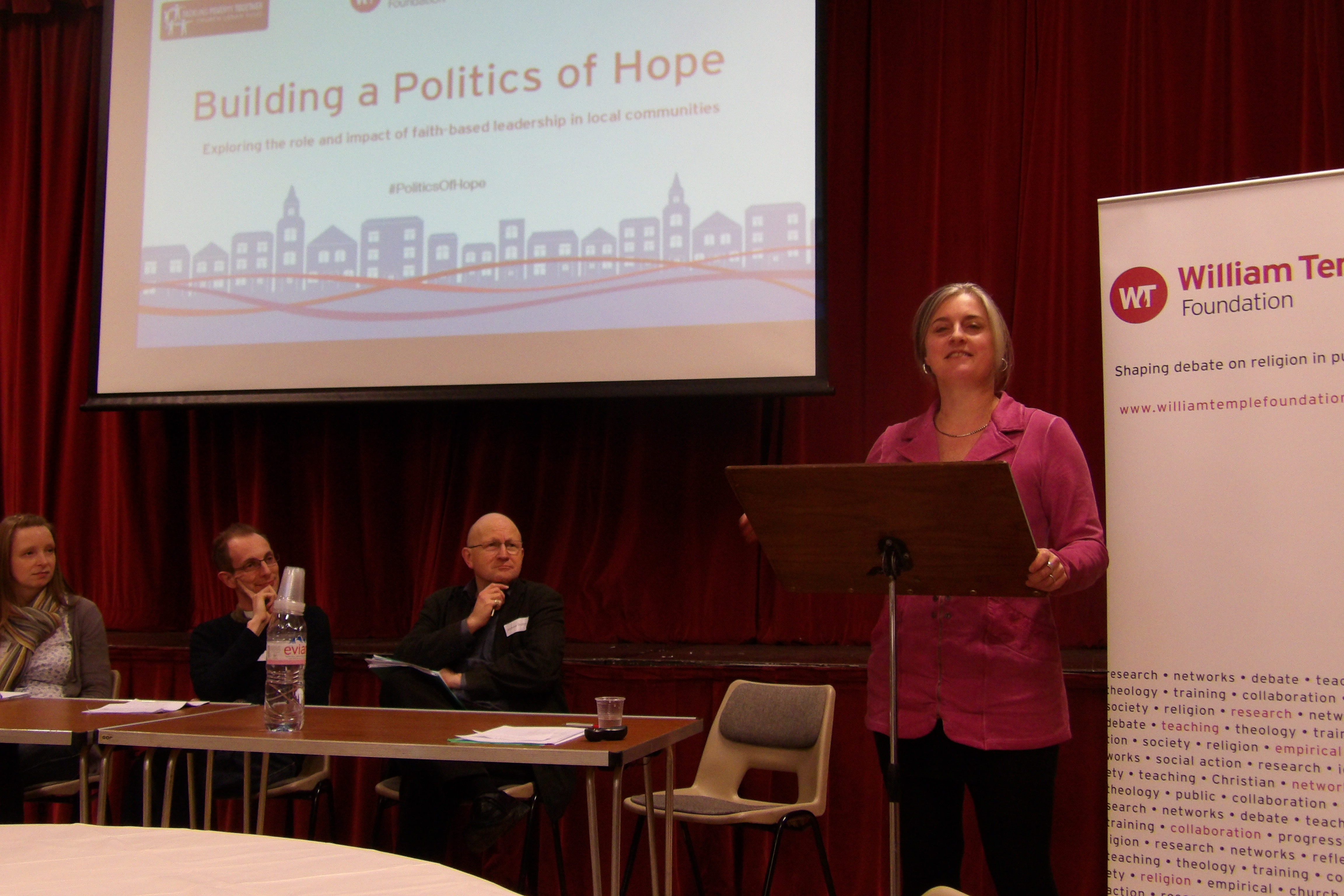 Our Director of Research Chris Baker, reflects on the conference ‘Building a Politics of Hope’ held in central London on Tuesday 24 February, in partnership with Church Urban Fund and the Joint Public Issues Team.

The run-up to many of the recent UK elections has usually focused on who is competent enough to manage the economy. Since the late 1970s, the neo-liberal consensus has been that market economies provide not only the aspiration but the means by which we run a successful economy and therefore a successful society.

But with the financial crash of 2008, and the increasing poverty and inequality which has followed the introduction of systemic austerity programmes, there has been a huge crash in trust, in both the market and mainstream politics. This lack of trust has been reinforced by a perceived increase in political corruption which has seen the rise of so-called ‘antipolitics’. This means voting for single issue parties who promise apparently simple solutions to complex and intractable problems; for example, the idea that a nation state can take control of its borders and dictate the terms of engagement with and in the wider world. This sort of politics is usually based on appeals to unity and purity which involve the demonization of others – immigrants, welfare “scroungers”, other nations within the UK. A progressive politics (i.e. expansive and willing to engage with diversity and building trust) appears to be in short supply in an increasingly insecure and fearful environment, which even the present promise of economic growth no longer seems to quell.

This political landscape was the background for our recent conference entitled Building a Politics of Hope: Exploring the role and impact of faith-based leadership in local communities. Several key themes emerged from the discussions and reflection generated by the three case studies we explored.

The first case study [listen to the audio recording] was dubbed ‘an innovative experiment in community empowerment’ in the Hodge Hill area of Birmingham; an area of high deprivation and diversity which recently lost its church building when it was demolished. The vicar, Al Barrett pointed out that his parish was full of those ‘others’ so roundly condemned by certain sections of the media and establishment politicians: immigrants, Muslims, single parents and unemployed youth. It was a community used to being ‘done to’ – labelled as dysfunctional and in need of ‘expert’ intervention and surveillance.

The church community perceived the need to change the narrative of those living in the community as a first step to creating a new sense of hope and transformation. This it did conducting one to one conversations and ‘hearing into speech’ the issues and aspirations of the local community. This led to the production of a theatre and culture space and the opening of a new community hub called Open Door which operates according to the principle of the five Ps: place; people; presence; provision and participation.

This highly relational approach has not only shifted the cultural narrative, but also the political one. The initiative has reconfigured the relationship between the community and Local Authority as well as the institutional church who now understands the three key questions emerging from these new processes of co-production and the order in which they should be addressed.

Up to now, external authorities would have addressed these questions in precisely the opposite order.

The second case study [listen to the audio recording], presented by Mohammed Mamdani, was a relatively new Muslim-run community foodbank and Kitchen in West London, called Sufra, a word which has strong connotations of hospitality and dining in many different languages. 90% of the people who access their services are non-Muslim The provision of food support is not viewed as an end in  itself – indeed Mohammed was critical of the proliferation and politicisation of foodbanks as new expressions of institutionalised poverty. Rather Sufra see their project as an entry point to accessing other life opportunities, including a food academy offering accredited training for 16-25 year olds who are not in employment, education or training.

Sufra will also be a venue for pre-election hustings, reinforcing the idea that faith-based spaces of welfare are also becoming spaces of political debate and conscientisation. Mohammed thinks that Sufra represents a new space for third generation British Muslims whereby they volunteer more and become engaged politically and practically to meet the needs of the local community of which they are part, rather than the more traditional route of giving charity to global Muslim projects.

The third case study focussed on the launch by an Anglican priest, Chris Sunderland, of the Bristol Pound – a local currency initiative designed, in Chris’s words,  ‘to give  people a taste of a different form of money, that was embedded in the local economy and could produce a  new values-led community of exchange’. The initiative, which had grown from several years of developing community allotments and environmental campaigns in Bristol, aimed at addressing climate change issues. The Bristol Pound was launched in 2012 and is currently used by several hundred business and individuals. It has been formally recognised as an official currency by the Bank of England.

The next challenge is to get the Bristol Pound used more widely in poorer areas of the city as a spur to setting up new co-operatives, social enterprises and pop-up markets. Overall the aim of Chris and his fellow trustees (who come from all faith traditions and none) is to ‘… bring people in touch with local producers, and encourage the uptake of fresh food through using buying groups that will order food through a bespoke web tool’.

So what lessons can we draw from these creative and diverse examples of faith-based welfare and economic engagement and what do they tell us a new politics of hope?

First, these ‘spaces’ of engagement, often based on affinities and networks and beyond the reach and approval of institutions (such as political parties and religious institutions) are ‘cross-over spaces’ of engagement between all faiths and none. Old binary ways of looking at the world based on rigid demarcations of religion, ideology and ethnicity (such as in the multicultural politics of the 80s and 90s) seem remarkably outmoded and irrelevant to many citizens who simply long to reconnect economics and politics to things that really matter. Two urban critical geographers, Paul Cloke and Justin Beaumont, define the growing significance of these new spaces of engagement as ‘… a coming together of citizens who might previously have been divided by differences in theological, political or moral principles – a willingness to work together to address crucial social issues in the city, and in doing so put aside other frameworks of difference involving faith and secularism’.

Second, is the common narrative or political philosophy that lies at the heart of all these projects; namely a radical and relational hospitality by which these new affinities and networks of action and outrage can be nurtured into a new spaces and practices of hope. Key to this radical hospitality and openness is the idea of ‘hearing into voice’ those of our fellow citizens who have been marginalised but in ways that totally negates the ‘Why me?’ victim mentality on which much of the current anti-politics is based. Here, in these new spaces of political conscientisation and progressive citizenship the emphasis is on relational belonging and solidarity, not stigmatisation and technological fixing outside of a moral framework.

Third is the growing evidence of  the ways on which these new practices of hope and ethical citizenship are feeding back up into the political and institutional chains of command, thus forcing institutions like local authorities and churches for example, to rethink their priorities and make them more responsive and effective for those on the ground.

One suspects that Westminster politics and the core of the banking systems will want to cling most stubbornly to outmode and disconnected ways of exercising power. But, as one respondent in our conference pointed out, faith-based welfare and social justice programmes not only articulate an alternative vison of society; they practically show what it can look like, and invite others to join them. There is ample evidence to suggest that this is in fact what more and more of our citizens are doing: looking for new local solutions to enduring problems in way that express a deep moral pragmatism.

Faith-based spaces and initiatives are becoming the location of choice where these hopes and aspirations can be expressed. This is what a politics of hope begins to look like. All of us have a role to play in ensuring that it flourishes in the hard challenges that lie ahead of us the other side of May 7th, whichever political party or parties are in power.

A selection of audio recordings from the event can be listened to online. Download the Event Report (pdf).

A selection of photos from the event can be viewed on our Facebook page.