To celebrate the launch of our new Temple Tracts series, Timothy Stacey reviews our latest publication…

In a time of global religious and political turmoil, can we find ‘a synergy between religious and secular that forges new possibilities for a global civil society’? This is the central question of Chis Baker and John Reader’s latest collaboration. The work understands religious extremism as one amongst many forms of disillusionment with a secular modernity that has failed not only to inspire solidarity, but also to develop political structures capable of controlling the key global force it has set in motion: capital. By placing religious extremism alongside other forms of disillusionment, Baker and Reader are able to suggest that the solution to both is the same, namely, rapprochement between people of all religions and none to curate creative responses to social and political problems.

The Temple Tract opens with a discussion of the perceived link between religion and violence. It suggests that although quantitative research reveals a decline in global violence over the last 50 years, there nonetheless remains ‘a very real fear of violence’, which places ‘huge stress on individual well-being and sources of solidarity’. Moreover, this violence has, since the Enlightenment, been associated with religion, and continues to be so, as evidence by reactionary media portrayals of religious extremism.

The writers then take three interesting steps. First, they explain the well-rehearsed argument that Enlightenment principles were developed to move beyond religious violence. Next, however, they suggest that ‘[t]he concepts of ‘religion’ and ‘the secular’…are both Post-Enlightenment inventions. What this implies for contemporary religious resurgence, both violent and peaceful, is that is symptomatic not of Pre-Enlightenment religion, but of a Post-Enlightenment religion that has been narrowed and excluded from the secular public sphere. The third step then, is to suggest what might be called a new, post-secular enlightenment whereby both religious and secular subjects open up to new sets of imaginations, discourses and actions. The Temple Tract further contends that as the nation state proves increasingly less capable of dealing with global phenomena, from terrorism to tax evasion, religions will become increasingly important players, connecting global visions with local communities.

Baker and Reader suggest that all of this theory has two key implications for practice: the first for Christian subjects, and the second for religious and nonreligious subjects more broadly. For Christians, the tract offers a wider understanding of God as a ‘virtual’ being, perhaps, one might add, that encapsulates multifarious ideals for a common good. For religious and nonreligious subjects more broadly, Baker and Reader call for the curation of spaces in which actors can simultaneously put broad differences aside to focus on the ideals they share in common, and have the freedom to develop their own beliefs. The focus on develop one’s own beliefs is particularly important for what Baker and Reader call ‘spiritual capital’: a concept which is ‘not the sole preserve of people who label themselves religious or belong to religious communities’, and whereby ‘the moral energy of values and beliefs gets channelled into practical engagement in civil society, the positive experience of which reinforces the integrity of that moral drive’.

The final section of the tract is aimed at demonstrating the theory in case studies. This section does not offer the kind of empirical analysis academics may expect (for this much of the further reading suggested will help), but rather offers hopeful examples such as may inspire people today to enter the world newly enlightened and excited to engage with people of all religions and none, to reimagine ways of living together.

Dr Timothy Stacey recently completed his PhD which explores social solidarity in an age of religious and ideological diversity. He is based at the Faiths and Civil Society Unit at Goldsmith’s, University of London. 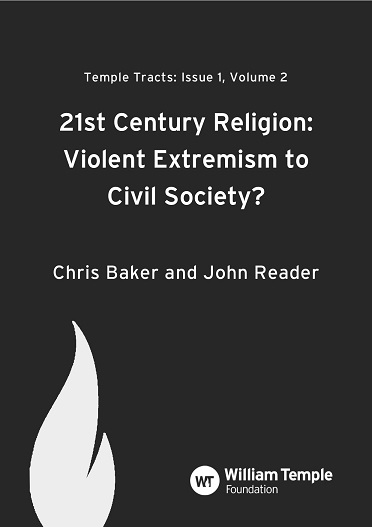