An Unlikely Story: How the Media Reveals Christianity’s Relevance

Of recent religious stories, the one generating the biggest splash across my Twitter feed was a scathing take on the BBC TV comedy Rev. Writing in the Guardian James Mumford describes the show as ‘pernicious’, undermining the church and a, ‘failure of representation’. Needless to say, numerous followers of this popular show jumped to its defence both online and via the Guardian’s Letters page. Prize for the wittiest tweet goes to cartoonist Dave Walker who wrote, ‘Saying Rev damages the church is like saying Fawlty Towers undermined hotels.’

Although less prevalent (at least amongst the Tweeps I follow) there was some agreement with Mumford’s criticism of Rev. P.M. Philips for example, tweeted, ‘in all its brilliance, [Rev] offers the same views of clergy that is the stock view of the beeb/media’. Mumford’s accusations follow swift on the heels of Tim Stanley who lambasted Rev for being too nice, and offering an inaccurate representation of Christianity. The ‘too nice’ argument incongruously arises in sharp contrast amidst recent criticisms of American TV shows which depicted Christian characters as viciously judgemental, argumentative and even murderous.

A supportive comment under Stanley’s piece suggests, ‘The show [Rev] is created by the luvvies in the media, so it doesn’t have a lot to do with real Christianity.’ The secular media, according to this line of thought, is unable to adequately portray “real” religion, for they know so little about it. Yet this begs the question of the media’s clear attraction to religion, faith and belief. Time and again these secular “luvvies” turn to religion and religious themes to provide a space for compelling narrative, drama and comedy.

Across the Atlantic, Time magazine recently ran the story, ‘God is Dead. Except at the Box Office’ depicting an increasingly secularising American audience which increasingly produces and consumes films with religious content. Such a phenomenon might be described by my William Temple Foundation colleague Chris Baker as yet another paradox of the post-secular age: the more that institutionalised religion appears to be in decline, the more people appear to talk about it.

I recently reviewed the book Media Portrayals of Religion and the Secular Sacred by Knott, Poole and Taira (the review will appear in the next edition of Crucible journal) in which the authors suggest that religion and religious themes receive greater media attention than some religious groups presume. They suggest that for people of faith, ‘it is not so much the absence of coverage that should be of concern as the wrong kind of coverage’. For Mumford and Stanley, the ‘pernicious’ Rev clearly falls under the ‘wrong kind’ category; an unsuitable portrait of the Church of England, and Christianity in general.

Another current example of religiosity presented in the media, comes in the form of the film Calvary, an extraordinarily dark comedy which follows a curious week in the life of rural Irish priest Farther James. This time the media “luvvies” take on the Irish Catholic Church and paint a grim depiction of child abuse, ‘bad priests’ and morally loose congregants openly lambasting the church’s increasing irrelevance. Yet Father James is cast as the (albeit flawed) hero throughout, drenched in humility and, as described by director John Michael McDonagh, a ‘genuinely good’ person. The film may be a secular take on the sacred but it leaves the viewer struck by relevant and important questions of death, sin, virtue and forgiveness as it intersects themes of God and godlessness, goodness, sorrow and pain – often in surprising ways.

But for all its merits, Calvary is very clearly a highly dramatized work of fiction. And according to the authors of Media Portrayals of Religion and the Secular Sacred, so often missing from media representations of religion are, ‘the everyday practices, beliefs and lives of ‘ordinary’ religious people.’ The eponymous Rev Adam Smallbone strikes me as a pretty ordinary religious person. In fact, he is a bit of a loser really, often coveting other people’s success and regularly saying and doing the wrong thing. But perhaps it is this ‘everyday’ representation which holds such appeal. With 1.7m viewers tuning in each week, as tweeter Keith Hitchman points out, this is almost the same number as those who regularly attend church so, ‘Perhaps Rev is how people want Christians to be?’.

Whilst it may be possible to argue that examples such as Rev and Calvary undermine religious institutions (certainly they both take pot-shots at church hierarchy, hypocrisy and institutional corruption) it’s much harder to suggest that they undermine religion or Christianity per se. Rev’s Adam Smallbone and Calvary’s Father James both offer portraits of church leaders who are far from perfect, who fall and fail like the rest of us, yet guided by God, they keep going and aim to do better. Representations of the flawed clergyman for some, might support the claim that the media colludes with the very worst stereotypes of the church. Yet people are watching, debating, and reflecting on Rev in droves – as my Twitter feed testifies. Religious and secular audiences alike are finding these imperfect clerical characters, these candid public representations of Christianity, to be both compelling and relevant. As such, these portraits of very human, clearly flawed, contemporary Christians perpetuated by the secular media, might indicate opportunities for the continuing role of the church in this complex post-secular society, rather than suggesting its undermining and demise.

”Never mind what Jesus Would Do: Progressive Atheism & the Big Society” by Chris Baker

“Blurred Encounters in a ‘Messy Church'” by Greg Smith 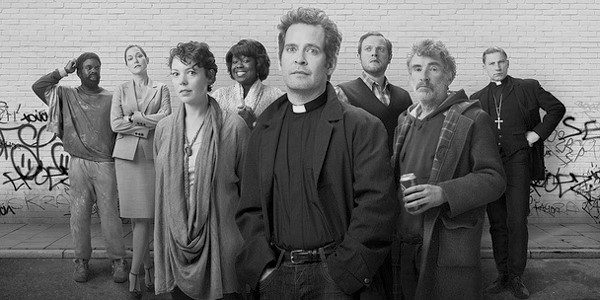