Review of ‘The Enchantments of Mammon’ by Eugene McCarraher

Associate Research Fellow Tim Howles reviews Eugene McCarraher’s monumental intellectual history ‘The Enchantments of Mammon’ and suggests that religious narratives could provide a much-needed antidote to the enchantments of capitalism.

At the end of 1917, during a conference at Munich University, the German sociologist Max Weber made his famous announcement: “the fate of our times is characterized by rationalization and intellectualization, and, above all, by the disenchantment of the world”. Weber went on to provide a historical account of the process of disenchantment as he saw it. As a result of the European Reformation, he argued, the route to Christian salvation no longer lay in the sacraments and the material presence of the divine, but in assent by faith. Acts that sought to bring about the reality of God on earth came to be seen as both inessential and irrational; human action thus became secularised. And this led in turn to the desacralised and disenchanted world of modernity.

Yet, Weber’s account has been questioned from many directions. After all, belief in the supernatural remains strong in contemporary society, as shown by the enduring popular interest in forms of magic, superstition and witchcraft. Moreover, does the idea of a general transition away from “enchantment” even make sense?

Recently, several historical works have supported a more complex picture. In his book Enchanted Europe: Superstition, Reason and Religion, 1250-1750 (2011), Euan Cameron argues for the existence of complex, multiple layers of enchantment within early modern European society. In various books, including Providence in Early Modern England (2001), Alexandra Walsham shows how the notion of enchantment was perpetuated and re-interpreted in an ongoing, discursive process of linguistic and cultural exchange during this period. And in his recent book The Decline of Magic: Britain in the Enlightenment (2020), Michael Hunter shows the extent to which changing understandings of enchantment took place slowly and at a local level, rather than being driven by dialogues and debates among theologians or intellectuals. It does indeed seem that we have cause to question Weber’s account.

Eugene McCarraher’s recent publication, The Enchantments of Mammon: How Capitalism Became the Religion of Modernity (2020), offers a mixed perspective on this debate. A broad and sweeping intellectual history, this huge book seems at times to drift into poetry, polemic and even spirituality. The essential thesis is that capitalism is best understood as a sort of replica enchantment: money functions as a substitute sacrality for a world that was never really disenchanted in the first place. Its power is mediated through myth, ritual and dogma, just as for religion. And yet the subject that emerges from its worship, homo economicus, is entirely non-graced, a shabby, degraded and inelegant echo of real human experience, driven by instrumental self-interest and controlled by the love of money.

To demonstrate this, McCarraher embarks on a deep survey of the various tracts, studies, theories and literature that have constituted the “symbolic universe” of capitalism since the Renaissance.

He begins with the English Puritans who developed a form of “communalist capitalism” (p. 115): they attempted to make money so that they might abound in acts of kindness and generosity to all. But having unleashed the genie, McCarraher shows how the benevolent order envisaged by the Puritans found itself redeployed in the service of monstrous techniques for the relentless accumulation of wealth. He takes us through the era of American (in-) corporation that took place between 1870 and 1920, and the machine idolatry rampant in 1920s Fordism, all the way to the other-worldly business utopias of the post-war western societies. The capitalist subject is no more able to envisage an alternative mode of existence than a religious believer is able to conceive of the world being outside the sovereignty of God: to cite the quip of Frederick Jameson, “nowadays it seems easier to imagine the end of the world than to imagine the end of capitalism” (Future City, p. 76). We end up in a world where the cult of the ruthless entrepreneur is finally sanctified in the guise of the unashamed plutocrat currently occupying the White House presidential office.

The solution that McCarraher offers involves the revival of a new “Romantic” left, the promotion of a new sacramental imagination where a culture of personal exchange and sacrality of local place might be valued above the disembedding mechanisms of modernity. He revisits the British Romantic tradition of the 19th century, recalling John Ruskin’s principle of “amazement”, which teaches that the gifts of nature should be admired and nurtured, rather than ravished and depleted. The book encourages a tone of “repentance and renewal” (p. 6) born out of recognition of our finite human nature and the planetary boundaries within which we all must operate.

It is here that productive dialogue can take place with religious traditions of various types. For religion provides resources that can energise the process of “repentance and renewal” that McCarraher requests. Religion has stories to tell about fallen human nature and the idol-making tendencies of the heart. But it also invites human beings to participate in a new economy of grace, where enchantment once again prevails as the devices and desires of the human heart are orientated to their proper end. McCarraher’s book provides a framework in which religious narratives of these sorts can and must be prepared to engage.

Cummings and the Church: An opportunity to grasp? by Chris Baker 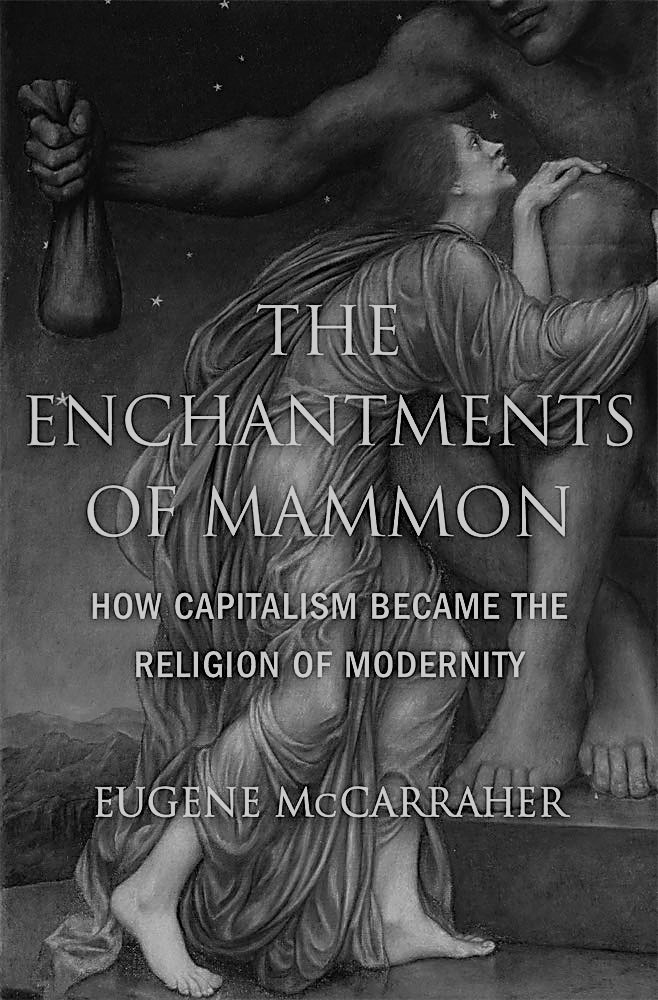