In a final blog on Extinction Rebellion’s recent activities, Matt Stemp turns to stillness and meditation as a vital grounding for social connection and political transformation. You can read the previous blogs here and here.

My eyes are closed, my hands are on my chest. It’s happening again, I think, as I steady myself on my ill-suited desk chair. By this point, I am used to my body being placed in an unexpected position. This time, I’m not sitting on top of a kitchen trailer in the early hours of the morning. Neither am I carrying an enormous fluorescent green turtle over a bridge, nor sneaking a compost loo past the police. These are simpler times.

Instead, I’m just being still and silent, gently focusing on my heartbeat and my breath. “Be present to this moment, to each other, and to God,” the meditation leader says. I lay my theological doubts aside for a moment in this brief escape from the omnipresent glare of the screen. The digitally mediated voice invites my muscles to relax and my internal rhythms to slow. I find myself in embodied and imaginal connection with people I have never met.

I’m on a Zoom call with a small group of Christians and spiritual seekers who have been profoundly impacted by the Extinction Rebellion (XR) movement—most via Christian Climate Action (CCA), one of XR’s faith groups. Wrestling with the lack of conversation and action around climate change in their churches, as well as the deeper narrative struggle about the complicity of Christianity with colonialism and quietism, they have started meeting to discuss what it means for them to follow the ‘rebel Christ.’ They call it a ‘heartspace,’ a place where practices of embodiment, vulnerability and vibrant discussion help them explore what this time of overlapping socio-ecological crises means for them. Their desire is to integrate their spirituality and their activism, their personal and political lives.

The vitality of social movements, as good organisers know, depends upon just these kinds of interactive and emotional spaces. Street protests are a part of the equation, yes, providing the context for solidarity to be expressed. A charismatic speech that articulates a movement’s identity and purpose goes a long way, too. But far more important is what happens away from the visible drama of demonstrating; it is off-stage, in formal and informal meetings, where the real work of social movements takes place. In ordinary times, it’s in the community centre, the church hall, the café and the pub where movements are socialised into being. The vast majority of them fail to begin. The rest emerge because the conversations and engagements behind the scenes have touched upon a felt sense of the sacred, something that ultimately matters enough to dedicate week after week to organising, recruiting and strategising.

Randall Collins’s sociological theory of ‘interaction ritual chains’ helps to explain this sense of how movements move, and why maintaining and building a social movement is so difficult in lockdown. For Collins, interaction rituals are gatherings where bodies share the same space, the same focus of attention, the same emotions and the same rhythms. Successful interaction rituals, where all of these dimensions can be found, generate ‘emotional energy’ among those involved. Without keeping this emotional energy alive, a movement eventually becomes drained of its passion and its ability to draw in new people.

In XR, it is the samba band that wins the contest for the most successful interaction ritual. Picture drummers leading the procession, followed by dancing, chanting, banner-waving rebels, their bodies and voices united in sound and movement. They are enjoying what Collins calls ‘rhythmic entrainment’: what happens when people’s physical actions become highly synchronised, leading to intense feelings of solidarity. But this sense of being ‘in the flow’ isn’t limited to these high-energy situations. For example, there is also the flow of a meaningful conversation, with its rhythms of call and response, combined with the mimicry of gestures, cadences and laughter. Whether or not someone joins or stays in a social movement (or any form of voluntary community), depends in large part on the success or failure of the ordinary-level interactions that take place. Holding boring meetings where only a few people speak is the perfect way to kill a movement stone dead.

But, as many of us are becoming all too aware in this third lockdown in the UK, meeting online significantly lowers the chances of leaving an encounter with good vibes. Without ‘bodily co-presence’ (Collins’s term), we can struggle to connect even to those who are usually closest to us. For many, the everyday has succumbed to a level of fatigue that no amount of self-care can adequately address. In a time when social movements are desperately needed, the conditions for their emergence and sustainability could not be more difficult.

Yet I left the online ‘heartspace’ feeling strangely alive again, a welcome contrast to the usual Zoom fatigue. As that feeling slowly faded, I recalled a similar moment with XR Buddhists. We had been sitting silently for over an hour in meditative protest outside a branch of Barclays bank as part of the rebellion in September. We all had blindfolds on, and we were wearing signs that said ‘Barclays: Blind to the Climate Crisis.’ After the sit, eyes reconciled to daylight, we reconvened to share our experiences. Someone memorably said that, for them, meditating was like having an ‘inner samba band.’ They found emotional energy to keep going through the practice of turning attention to the rhythm of the breath and knowing that others were doing the same. Being silent and still with others can also generate a deep sense of solidarity. Far from being merely individual acts of piety, these practices of silence and stillness are in fact thoroughly social. They are, of course, not a full answer to the problems faced by social movements right now. But, perhaps, if they are understood not solely as spiritual practices but also practices of embodiment and connection, they can help organisers to negotiate the glitches in our digital-social worlds. As Arundhati Roy says: ‘Another world is not only possible, she is on her way. On a quiet day, I can hear her breathing.’ Perhaps attending to the rhythm of the breath is one way to focus our energies on the political transformation to come. 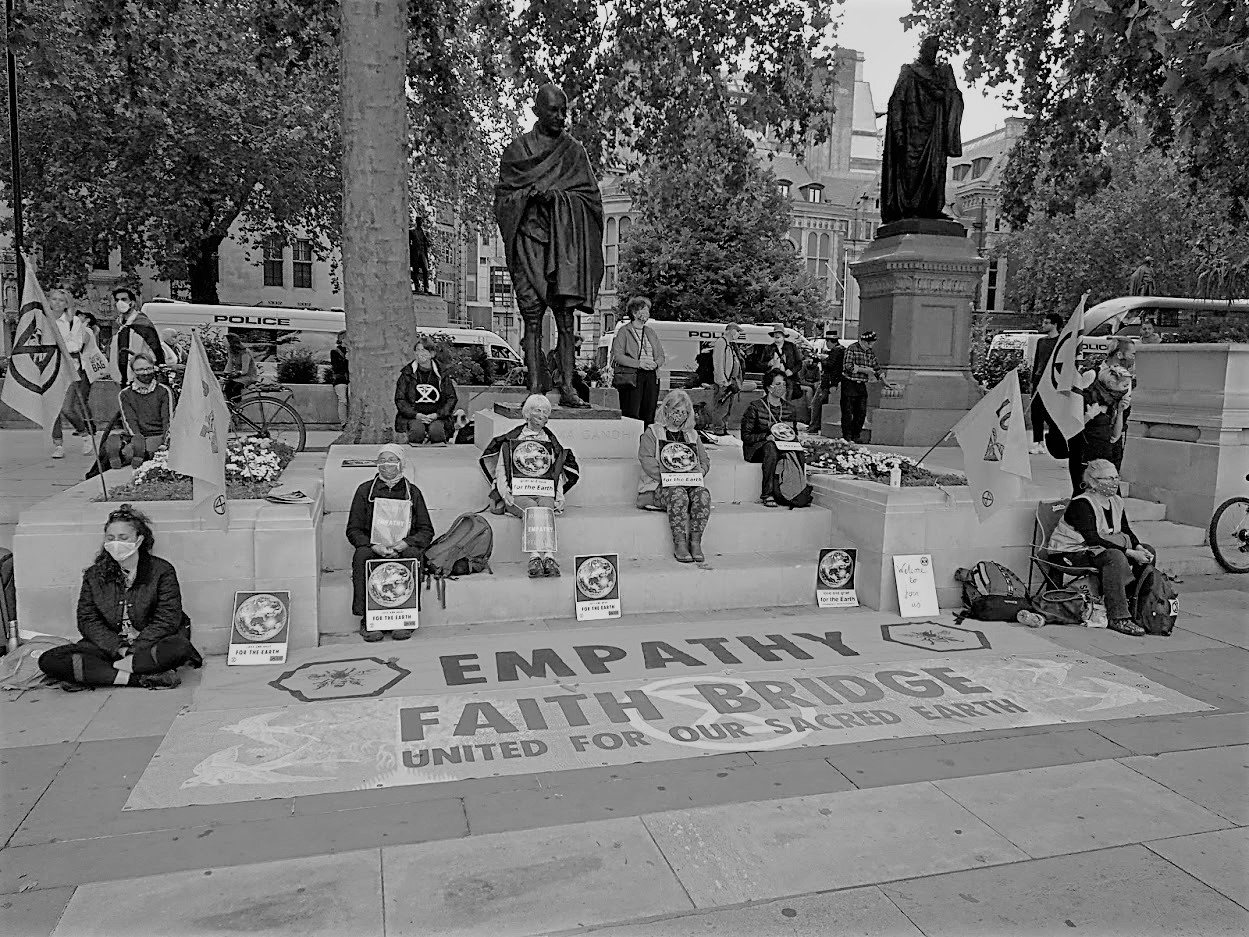 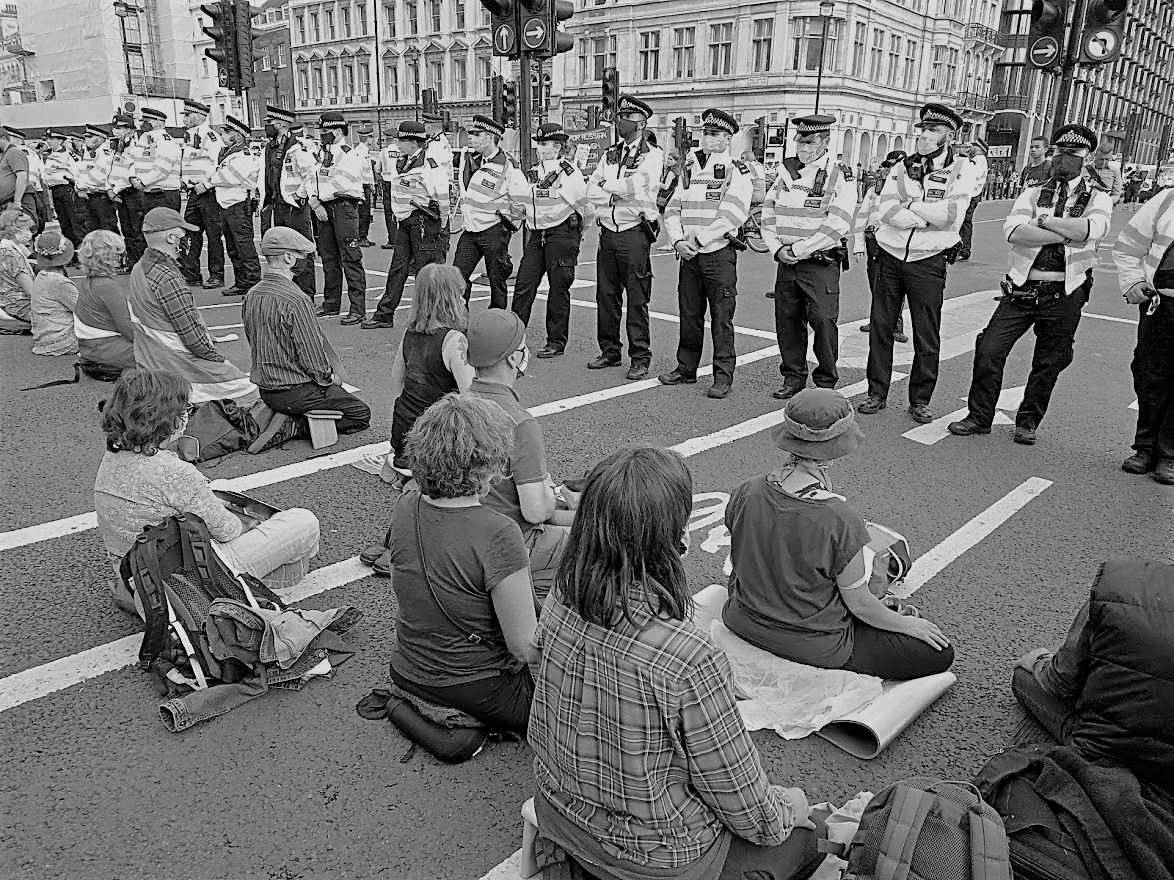