Candle in the Wind: Can Public Ritual Help Create a More Peaceful World?

Once more our media outlets and devices have been clogged with scenes of terror and devastation. Innocent citizens going about their daily business have their lives ripped apart by acts of violence. On Tuesday it was Brussels. The threatening question hanging in the air is ‘where next?’ And of course, beyond the boundaries of Europe, these occurrences are the stuff of daily nightmares around our world, in places and communities that barely register on our news agendas.

As current media coverage of Brussels shows us, a sort of procedural narrative has been created round the awful predictability of these events. Within hours of live coverage of the terrorist attacks, focus then switches to a public space in the centre of the city; a symbolic space of public freedom and access. Instant shrines emerge, a panoply of candles, flags, flowers, and home-made banners intermingled with graffiti on the pavements and surrounding buildings. People publically engage in forms of body language usually restricted to religious buildings. They close their eyes, mutter prayers, bow their heads, hold silence as well as sing communal songs and then often reconnect physically by embracing and hugging strangers, holding hands and forming circles.

These public and everyday squares (literally profane, i.e. outside the temple) become sacred spaces; spaces of rich symbolic ritual that reconnect individual and fearful souls together within an overarching narrative of love and solidarity. The anger and desire for revenge seems temporarily, at least, to be suspended. Ritual allows us a liminal space to stand aside and reflect on the fragility of life and what we want to bring to it.

Questions I am left asking include, why don’t we do this more often as a natural part of our lives? Why is this not a permanent feature of the way we live our lives today? Why do we only turn to ritual in times of crisis, almost when it is too late? Why do we ‘moderns’ seem to have lost sight of the importance of symbolic ritual and worship in our lives?

There are perhaps two reasons. One is the legacy of the Western Enlightenment on the 19th and 20th centuries, which whilst it helped bring about many good things to humankind in terms of ideas of democracy, progress and rational autonomy, it also brought about what Max Weber famously called the Age of Disenchantment. We swapped wonder and awe for measurement and empiricism. If we couldn’t measure it or rationalise it, so the argument went, then it wasn’t worth considering as true or relevant. The other of Weber’s famous metaphors was what he called the ‘iron cage of bureaucracy’ into which humankind had now trapped itself in the systems of mass production, mass consumption and control.

But perhaps the zeitgeist is shifting. Certainly the 21st century feels very different to its predecessor. Many people I talk to testify to a deep desire to reconnect to something larger than ourselves: to be reconnected to something beyond the material and the technical – to be re-enchanted.

Two recent events have highlighted this apparent trend for me. The first was the intriguing discovery of chimpanzees hurling rocks at trees and placing them inside tree trunks, which scientists suggest is not related to food consumption, but related to a deeper need to mark significant places in the landscape for their own psychic health and wellbeing. If true, then it suggests that ritual, and places set apart for us to offer something beyond ourselves, is a deep, existential and natural need that we ignore or suppress at our peril.

The second and related point was to reflect on the very rich discussion that the Foundation held in Birmingham recently as part of our Faith and Flourishing Neighbourhoods Network. The network is exploring the connections between beliefs and “placedness”, and raising the question of the need for a deeper purpose in house-building, other than just meeting housing shortages. We listened to five case studies of very different built environments which religious and other beliefs have initiated, shaped and are still shaping, including; inner-urban suburbs, garden suburbs, outer-urban housing estates, new exurbs and provincial cities. We identified the following roles that beliefs play in helping to create sustainable and flourishing public spaces including as a founding vision; as a space of temporary ritual and belonging; as spaces that model tolerance and radical hospitality; as bridge-builders between entrenched communities; as spaces of knowledge exchange and learning; as communities committed to ownership of the community (but not in the ‘right-to-buy’ sense).

The main point about all these narratives of belief and place making is the fundamental human need and desire for reconnection – reconnection with each other and reconnection with meanings and values that inspire us to act beyond our narrow ideologies and fantasises. What lies at the heart of these narratives is the importance of creating spaces, places and processes of ritual though which people can journey on a daily basis alone, but also in solidarity and communion with others.

Acts of terror and the ideologies that support them attempt to disconnect us from each other and offer instead an ideology of hatred, fear and isolation. Ritualised coming together strengthens our intellectual, emotional and spiritual resolve to resist these affronts. In our materialist and increasingly divided culture, we have neglected the simple and effective power that can emanate from these practices and spaces.

We need to create a sense of civic politics and place more rooted in inclusive ritual. Only then might the temporary relief gained by lighting a single candle in a windswept market place, perhaps, be converted into a movement for progressive political change. 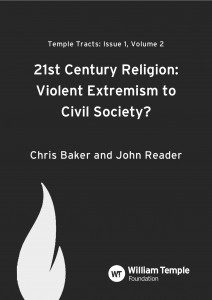 #JeSuisCharlie One Year On: Have We Really Learned Anything?
by Chris Baker

Regard Caesar with Suspicion, but the Rule of the Corporation is Scarier
by Eve Poole

Does the Fairtrade Movement Still Need the Churches?
by Mark Dawson