Review of ‘#newpower’ by Henry Timms and Jeremy Heimans

Associate Research Fellow John Reader reviews ‘#newpower’ by Henry Timms and Jeremy Heimans and wonders how new the exercise of power in the digital age really is.

The book’s subtitle—”why outsiders are winning, institutions are failing, and how the rest of us can keep up in the age of mass participation”—sets the agenda. From the outset Timms and Heimans lay out the differences between what they call old power and new power. Old power works like a currency. It is held by the few; jealously guarded, closed, inaccessible and leader driven. It downloads and it captures. New power, however, is like a current. Made by the many, it is open, participatory and peer driven. It uploads and distributes, and the goal is not to hoard it, but to channel it (p. 2). The test of the book is the extent to which the examples they offer do represent new power in action.

Alternative understandings of power are not, in themselves, new. According to Foucault, power is always already there; it is not a zero sum game, nor is it something which only an elite possess. Power always presupposes counter-power. What is new in Timms and Heimans’ interpretation is that we are now living in a hyperconnected world where the means by which power is exercised have been transformed by the technology available.

Timms is president of 92nd Street Y, a cultural and community centre which fosters learning and civic engagement, and Heimans is the co-founder and CEO of Purpose, a company that supports and builds social movements around the world. In 2005 Heimans co-founded the Australian political movement GetUp!, and the global campaigning community Avaaz. One imagines that their personal experience may enable them to offer some original insights. They write:

“thanks to today’s ubiquitous connectivity, we can come together and organize ourselves in ways that are geographically boundless and highly distributed and with unprecedented velocity and reach. This hyperconnectedness has given birth to new models and mindsets that are shaping our age.” (p. 8)

The book presents tables and diagrams to illustrate its argument. This includes what the authors term ‘the tale of two mindsets’ which are doing battle in today’s world (p. 18). The Old Power Values are those of formal governance and managerialism; competition and resource consolidation; confidentiality and the separation of the public from the private; expertise and professional specialisation; and long-term affiliation and loyalty—all of which presuppose low levels of participation. By contrast, the New Power Values are those of informal governance and decision making; collaboration, crowd wisdom and open sourcing; radical transparency; a “do it ourselves” ethic; and short-term conditional affiliation—all associated with higher levels of participation. They qualify their claims by suggesting that although these two sets of values can come into conflict it is better to see them on a spectrum, rather than as a binary opposition (p. 19). They also present their ‘New Power Compass’ (p. 28), which places organisations into different quadrants depending on the extent to which they not only espouse, but also practice, new power values. Apple, for instance, operates according to old power values and an old power model. Facebook and Uber function according to the new power model but with old power values. There are cheerleaders such as the Guardian newspaper and Unilever which espouse the new power values but still operate according to the old power model. And then the ‘crowds’, which are examples of businesses or movements which function as new power models allied with new power values. Amongst these—and these are the real test of the overall argument—are LinkedIn, Airbnb, #BlackLivesMatter and Occupy.

Chapter 3 draws a distinction between what we know as sound bites and what the authors term ‘meme drops’. An example of the latter is the Ice Bucket Challenge, which provided a blueprint for action dropped into a fast moving current of ideas and information, and was capable of being taken in different directions in different forms (p. 36). In other words, rather than being prescriptive it allowed people to adapt and develop in whatever way seemed appropriate to them in their specific context. The authors extrapolate from this that the three key design principles for enabling an idea to spread in a new power world are that: an idea be actionable (it makes one do something); it is connected (brings one into contact with others as part of a network or connected community); and that it is extensible (can be remixed and shaped by the participants).

The chapter on leadership throws light on not just the US, but also UK politics. How was Barack Obama’s regime able to be so easily overturned by Donald Trump—particularly as the former had apparently employed many of the new power models and values being advocated? Obama began as the ultimate new power leader with his own background in community organising and his capacity to engage and mobilise grass roots activists. The authors suggest that Obama’s campaigns and subsequent practices developed into something too formal and too structured, whereas Trump’s equivalents were deliberately unstructured allowing people to feed into his approach with a greater degree of flexibility. This makes Trump a very worrying example of new power models at work. As Timms and Heimans so tellingly put it, Trump “revels in the instability of countless truths” (p. 169). Trump is an example of the ‘Platform Strongman’ who co-opts a digital crowd and deploys new power in order to advance largely authoritarian values.

One could argue that similar tactics are at work in the UK. Somewhat like Trump, Johnson articulates a series of bold and brash statements and claims which seem to bear little relationship to the realities the country is facing. Can current alternative movements or gatherings seriously challenge this exercise of power? That is what the authors are clearly trying to propose through the examples they offer, even though many are either trivial, short-lived or not as clear cut as they would like.

One of the real challenges is how to restore public trust and confidence in the structures and institutions which still function according to old power models, even though they may be moving towards espousing new power values. One suggestion the authors present is that of a “public interest algorithm” (p. 249). These would have to be more transparent, participatory and open to scrutiny than those now employed by the participation farms such as Facebook and Google. This idea does offer some hope for a more democratic process in our hyperconnected age, and it is a suggestion worth pursuing.

Overall, there are certainly fascinating nuggets here. But I am left wondering whether new power is really as new and radical as the authors claim? 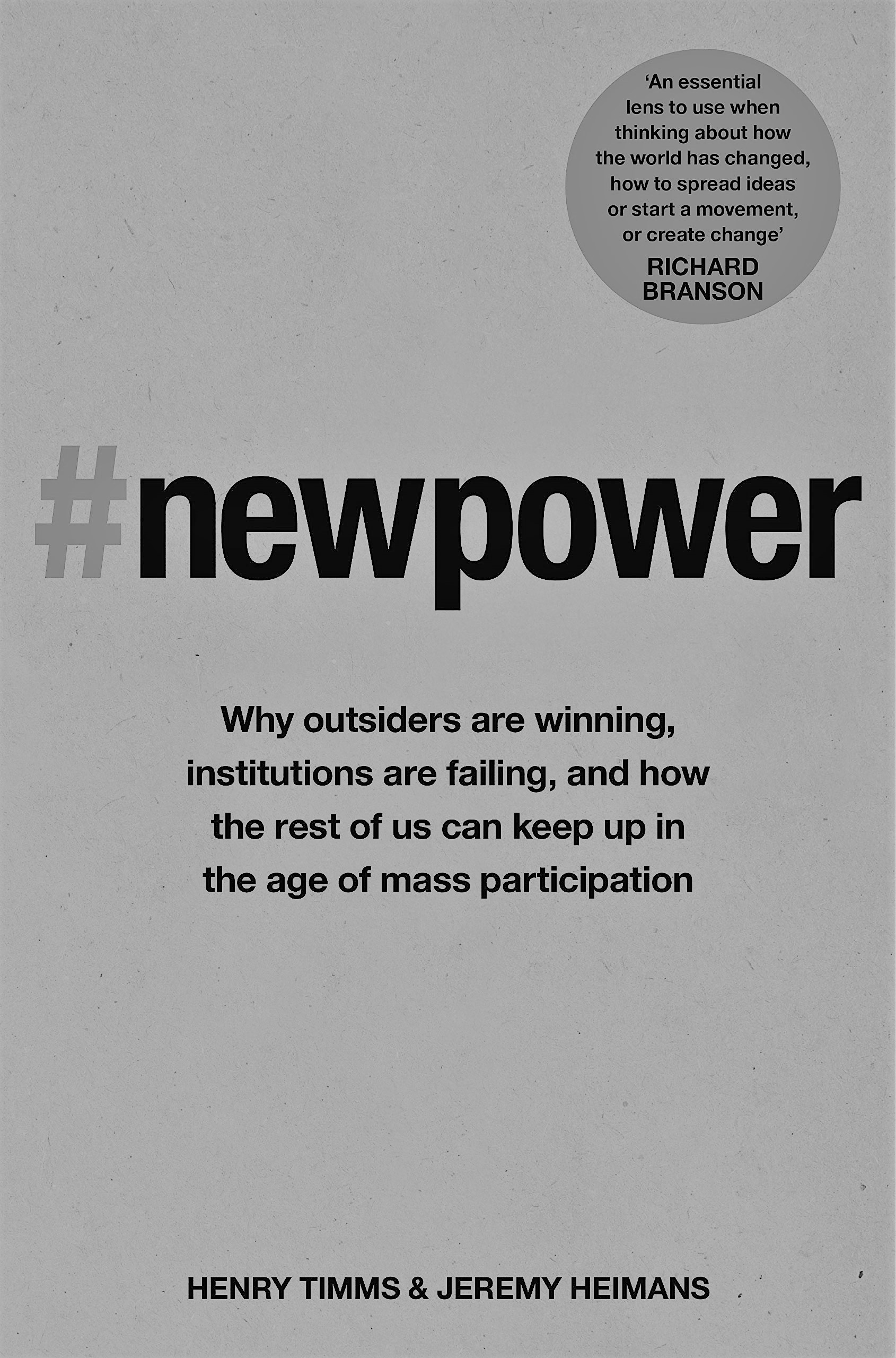