Whatever now happens as far as Brexit is concerned, it is important to understand how we reached such a divided and traumatic state of affairs in the contemporary experience of life in the UK. Anthony Reddie’s book helps us to do just this from what, for many, will be an unusually illuminating perspective.

The stated aim of Reddie’s book is to provide a prophetic, postcolonial model of Black liberationist theology. His purpose is to challenge the Church and wider society to live out the gospel of Jesus and remind us that a so-called Christian nation has to be one in which there is justice and equity for all, not just a privileged sense of entitlement for some. Reddie’s ten chapters are wonderfully discomforting and certainly fulfil Walter Brueggemann’s description of genuinely prophetic work: to provide a critique of contemporary society and to release the passion to act for the common good.

The first part of the book consists of five chapters in which Reddie considers the background to Brexit. He begins by exposing the link between Christianity and empire, and the resultant White English exceptionalism that has helped to shape our national identity, and which, he says, underpins the Leave vote. He then outlines ways in which the church has often conditioned Black people into internalising the tropes of empire within their psyche alongside their White counterparts so that they end up defending these ideas and behaviours, and even supporting the Leave campaign. He explores the role of what he describes as imperial mission Christianity in this internalisation via Christian education and suggests that this has had a corrosive effect on both those who identify as White and those who identify as Other. He asks what it means to be a ‘proper’ human being in Britain and suggests that the invisibility of Whiteness causes a sense of entitlement and normality that underpin the Brexit vote.

A further five chapters make up parts two and three of Reddie’s book, entitled “Responding to the Challenge” and “The Critical Challenge of the Other”. Here, he tackles head-on theological and political perspectives coming from received frameworks of thinking that assert particular practices and ideas as normative—an example of which is the way that many Black majority churches remain wedded to a form of White Biblicism. This is, of course, as he recognises, equally true of swathes of contemporary evangelical, charismatic and pentecostal churches. It is an approach that brings with it unconscious perspectives on God, the church and the world that are rooted in the Christendom partnership of Church and empire. Reddie’s alternative to this is a two-fold hermeneutic in which the sacredness of Black bodies and the realities of Black suffering and struggle provide the lens through which to exegete the scriptures. While I would wish to root this in a specifically Jesus hermeneutic, it provides crucial insight. He then commends Black theology’s recourse to transformative methods of education such as Paulo Freire’s concept of ‘conscientization’, through which poor and oppressed people become politically aware of the dehumanising circumstance in which they live.

For me, Reddie’s greatest resolution to the contemporary crisis comes in his insight into the positive critical challenge of Otherness. He offers three critiques of normative White British culture: Rastafari theology, Black theology and Womanist theology. Whatever we ultimately make of these, such alternative lenses of an honourable ‘Other’ should surely help us forward towards overall wellbeing. We need help to undo what, for many of us, is a persistent, subconscious, patriarchal, White majority expectation of our national future. This concluding part of the book is highly innovative, bringing together Caribbean theology, cricket and the socialism of Fidel Castro. It is also highly topical given the shocking deportation of Windrush elders since the EU referendum and is a wonderful demonstration of the gift of the Windrush generation to British life and culture. Reddie concludes by outlining the way in which the complex identities of diasporan African peoples in Britain, informed by postcolonial theologies, can give rise to hermeneutical tools for prophetic truth telling.

By presenting a Black liberationist theological perspective from the Windrush generation of African-Caribbean English citizens, Reddie argues that White British patriarchy not only undergirds the Brexit vote but also a great deal of our culture and identity. He is, as he concludes, benignly ambivalent about the European Union, but he is convinced that Brexit has exposed the racist and xenophobic underbelly of Britain and particularly the English. As he puts it:

“This text is a radical challenge to White Christianity to do and be better! It is a challenge to live out the radical, egalitarian dimensions of the trans-national identity of the gospel of Jesus Christ that calls us to love our neighbours as we ourselves would want to be loved.”

This is a polemical and unapologetic critique of the underlying causes of the Brexit phenomenon. As I have already emphasised in my own blog posts over the last few years, I am not accusing my Leave voting friends of consciously holding these views. However, with Reddie, I do believe that these are the substantive motives behind the desire for Brexit in the corporate life of the nation and we all, however we voted, do well to reflect on the perspective of a fellow Englishman with a lifetime’s experience of the oppressive ongoing residue of White British imperialism and cultural supremacy.

A fuller, two-part overview of Reddie’s book can be found on Roger’s blog. 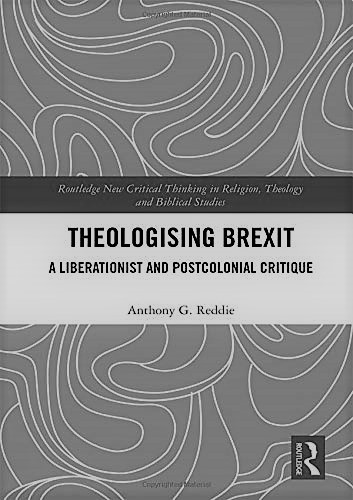