In the second of a three part series to celebrate the publication of his landmark new book, William Temple Foundation Associate Research Fellow John Atherton introduces the key themes of his work on religion and wellbeing. ‘Challenging Religious Studies: The Wealth, Wellbeing and Inequalities of Nations’ by John Atherton will be published on 31st October by SCM Press.

For the three economic perspectives on the wealth, wellbeing and inequalities of nations, namely income, health and subjective wellbeing, I have developed a model for relating Christianity to each.  In terms of subjective wellbeing it is clear that Christianity has been demonstrated by secular research to score better than other sources.  The following introductory section illustrates this and how Christianity achieves it.   I am pretty sure that the same could be done for its contribution to health but it is engaging the first perspective – income – where Christianity is weakest.  Recent publications such as ‘Just Money’, published by Theos, and Peter Selby’s ‘An Idol Unmasked’ illustrate these inadequacies.  The second part of this blog begins to set out an agenda for correcting these grave Christian limitations.

Although contemporary research on religions’ contributions to wellbeing (particularly subjective wellbeing) is of recent origin, ‘In survey after survey, actively religious people have reported markedly greater happiness and somewhat smaller life satisfaction than their irreligious counterparts’. That conclusion is confirmed by economists, for example by Layard who states, ‘one of the most robust findings of happiness research: that people who believe in God are happier’, and by Graham arguing that, ‘In most countries, respondents that express faith or religious affiliation – as well as those who practice their faith – are, on average, happier than others … In most of the rest of the world’; by psychologists like Seligman: ‘survey data consistently show religious people as being somewhat happier and more satisfied with life than nonreligious people’; and finally, by sociologists, for example Putnam: ‘As with good neighbourliness, the correlation between religiosity and life satisfaction is powerful and robust … Other things being equal, the difference in happiness between a non-churchgoer and a weekly churchgoer is slightly larger than the difference between someone who earns $10,000 a year and his demographic twin who earns $100,000 a year’.

Why is the relationship between Christianity and subjective wellbeing so positive? Answering that question will occupy the rest of this chapter. But that is not its principal objective. The task is rather to explore the relationship between Christianity and wellbeing, initially and principally through a focus on subjective wellbeing. That entry point will then be extended, at the end of this chapter, to engage health and income, so together embracing the three great perspectives on the wealth and wellbeing of nations that are at the centre of Chapter 2’s agenda. The subjective wellbeing perspective has been selected as the main entry point of this research at this stage because achievements in this field, in terms of the contributions of economics, psychology, sociology and religious studies, are most comprehensive, robust and consistent. And it is out of these relationships addressing this shared area of concern – subjective wellbeing – that there emerges a model for Christian engagement with both this perspective, and probably the other two; health and income. The model can therefore also be deployed to address the relationship between Christianity and economics. As the introductory Chapter 1 noted, one of the tools to be used in exploring this relationship is the deployment of models, reinforced by statistical evidence and located in historical contexts. So the following elaboration of the chosen model will also involve reflection on the nature and role of measurements in religious studies, and the following Part 2 and Chapters 4 and 5 will explore the historical contexts of such research.

The following material focuses particularly and initially on the task of mapping as a way into modelling in some detail those practices, ethics and beliefs of Christianity that resource its robust and positive contributions initially to subjective wellbeing. These are drawn and confirmed from both secular sources and Christian traditions, recognizing their correlative and causal relationships, with their principal features further elaborated with reference to the main Christian denominations, major world faiths and secular spiritualties. This section will conclude with a brief exploration of the model’s transmission processes, showing how Christianity influences the development of greater wellbeing in society. The following section will then examine the implications of such a mapping and modelling exercise by developing appropriate measurement tools for religious studies’ contribution to human wellbeing and for religious studies itself. The final brief section will then begin to explore the feasibility of deploying the model in relation to health and then income, the other perspectives on the wealth and wellbeing of nations.

Exploring the great escapes from poverty and premature death and the resulting great inequality divergences is a profoundly modern and contemporary story, as is the development of a Christian engagement with such a grand narrative. Yet it’s an account that needs enlarging and enriching but also qualifying and analysing. And that best requires locating it in historical contexts that are both long in extent (and I really mean long, going back to the end of the last Ice Age and before!) and more recent in intensity (since 1750 CE). That will also enable us to see the importance of religious contributions to social development in the more general context, for example through the radical operations of the axial age in the last millennium BCE, but then also in two nations in more recent history since 1700 CE, in the USA and UK.

Such evidence will certainly confirm and elaborate the provisional conclusions emerging from Chapters 2 and 3 that life is getting better for more and more peoples and nations and that Christianity has a robust role to play in that improving of wellbeing. Yet it’s equally clearly getting better-ish, with the dramatic damaging increases in inequalities both between and within nations. And it’s in that order that hard evidence now locates them, as nations getting better, then that ‘better’ being qualified.  Both these trends, positives and negatives, will also play a prominent part in the long history, with certainly as much emphasis being placed on the negatives through the repeated bumping against robust ceilings of increasing social development, and the regular violent eruptions of the four horsemen of the apocalypse.

There are four brief stages in this introductory argument of locating the themes in historical contexts. They begin by first using contemporary multidisciplinary surveys of the very gradual progression of social development from the end of the last Ice Age, about 13,000 BCE, until the eighteenth century in modern times. The archaeologist and historian Morris’s work, including his deployment of a Social Development Index, is of particular value in tracing and illustrating the improvements in wellbeing over such a long period of time.

On Christianity, incomes and material wellbeing: Addressing the first perspective

At first sight this is the most difficult task of all. For so much of certainly Christian history, the concept of money dominated understandings of income and material wellbeing. And it has a terrible press, not least through the influence of the Christian Scriptures’ pronouncement that money is the root of all evil and Jesus’ call to the rich young man to sell all and follow him and his refusal to do so, because he had great wealth. The painting on the Markham Chantry Chapel from the early 1500s, used in my first blog, says it all, with the rich young man, with his hand on his purse, warned by Death that even the wealthy cannot buy him off. All these pressures led to the continuing theme regarding money as a god, including by some leading theologians today. This is confusing, unhelpful and inaccurate (I almost said plain stupid!). Historically, money’s place in resourcing human life was very limited until at least the eighteenth century. As we have seen, the vast majority of people had very little of it, because they were poor and lived very straitened lives. In such situations money often becomes a symbol of the reality of their marginalization and oppression. When the Industrial Revolution increased and improved the lives of more and more people, income understandably occupied a much bigger part of their lives and the lives of nations. Then it really does become a god for so many theologians and church leaders despite its liberating consequences for the majority poor. What this book tries to do is to correct such general moral confusions, and this is a particular point where that is absolutely essential. Any contemporary consideration of income must recognize its central contribution to contemporary wellbeing both in itself and as key facilitator and contributor to other foundations of wellbeing, from the provision of the basics of housing, food and clothing, to health care, education and governance.

And doing that effectively and adequately is what my model has to be able to engage. That is a particularly difficult task because it involves entering the engagement between Christianity and economics (and therefore recognizing and addressing the great gulf between them), and then also developing Christian practices, ethics and beliefs in relation to income and what and how income helps to resource other key foundations of wellbeing, and only then, and from such evidence, can the nature and extent of Christianity’s contribution to this first perspective be tested in terms of the viability, or otherwise, of my model. 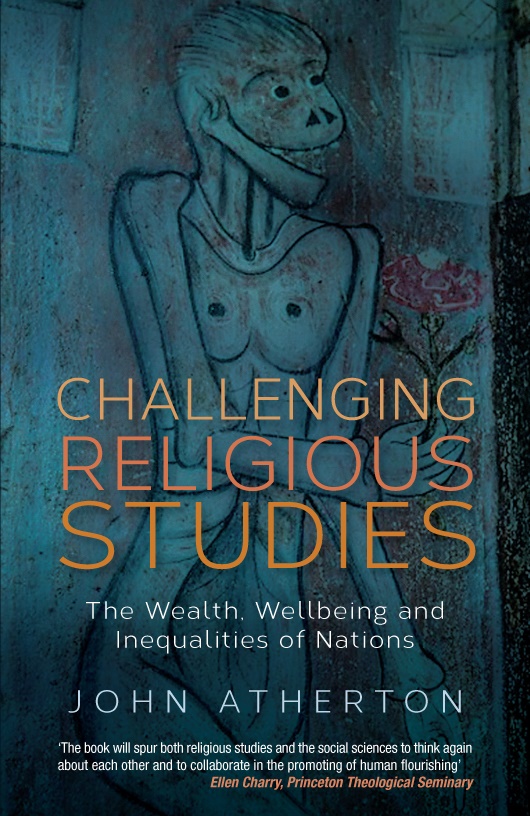