In the first of a three part series to celebrate the publication of his landmark new book ‘Challenging Religious Studies: The Wealth, Wellbeing and Inequalities of Nations’ John Atherton introduces the key themes of his latest work.
The following is an edited extract from the book’s introduction. It is published on 31 October by SCM Press.

This book is about what matters most to most people, most of the time, whether as individuals, families, communities or societies. It is therefore deliberately and primarily about what the American sociologist Robert Bellah has called ‘the world of (the) daily life’ of people which they face with ‘a practical or pragmatic interest’.

That is how it is so often for most people, and it always has been since the dawn of the human about 200,000 years ago. For other commentators like the archaeologist and historian Morris, surveying human life from 15,000 years ago, it is about society’s ‘abilities to get things done in the world’ including in terms of the adequate provision of the basics for human life on earth, as food, clothing and shelter, and increasingly, too, in later periods, in terms of life expectancy, health and education. You can’t have a good life if you die before the age of five, and now we don’t. In other words, this story is simply about the ‘world of daily life’, but it is also significantly about, for the economist Angus Deaton, ‘how people have managed to make their lives better’, so often in terms of ‘what makes life worth living’. And, at the heart of these changes in human development lie the Industrial and then Mortality Revolutions from the eighteenth century, transforming human life in ways never achieved and never really dreamt of in the previous 200,000 years of human history. And all this so often allows and enables that concern to be developed into the pursuit of a good life, a life that turns out well, the basis of a flourishing life and community. It is, as John’s Gospel reminds us, the importance of not just having a life, but having it more abundantly. It is very difficult to have the second without the first, as liberation theologians have rightly reminded us.

But this story is also about how these amazing developments in human living have been intimately accompanied by what historians and economists call ‘the paradox of development’ or the often negative and destructive or damaging consequences of social change.  For example, the astonishing improvements in economic growth, so important for nurturing, sustaining and progressing human wellbeing, have also been accompanied by breath-taking increases in inequalities, particularly between nations, but also within them. Such inequalities are symptomatic of that paradox of development, but clearly, as the story will recount, they stretch more widely to include, for example, increasingly destructive environmental damage, but also the historic other ‘four horsemen of the apocalypse’ namely hunger, epidemics, migrations and state failures.

Of course, what matters to people, communities and nations cannot be adequately summarized by their improving wealth and wellbeing, because the world of daily life, however central and essential for human survival and betterment, has always been, at least for 100,000 years, also accompanied by the field of religion, so often of such importance for sustaining and enriching human life. Sociologists talk therefore of humans inhabiting ‘multiple realities’, which inevitably and invariably constitute ‘overlapping realities’. So there is now, and always has been deep into human evolution, an acceptance that there is more to human living than the daily struggle for human existence in terms of achieving the necessary basics for human living, of food, clothing and shelter, and now of income, health and education.

So this story is about at least both, about the economics and biodemography of life and about the religious dimensions of life and how they have, and need to, come together in ways that recognize and engage constructively these most profound changes the human has ever experienced in the profoundly material, though never exclusively so, dimensions of life as income, health and subjective wellbeing.

Of course, religions in general, and, in my case, Christianity in particular, have at best, persistently refused to take these matters and these changes seriously. They have rarely prioritized them, as the world of daily life does, and has to, and they have rather and regularly focused on the negative consequences of the paradox of development and almost never on the processes of social development that contribute to the furtherance of human wellbeing. They have pursued the soft option of prophecy for the hard struggle for construction and reconstruction… That is the gulf that this story seeks to address.

What’s the argument of the book?

Its arguments are stated in only two parts.

The first part explores the growing and telling evidence for the wealth, wellbeing and inequalities of nations through the three perspectives of income, health and subjective wellbeing in Chapter 2. Chapter 3 then develops a model from the interaction between secular and Christian (and other religions) understandings of the nature and significance of the religious contributions to engage initially the third perspective of subjective wellbeing. This then recognizes the likely feasibility of the model’s transferability and adaptability to engaging the second (health) and then the first (income) perspectives. Together, they could constitute a model for Christian engagements with economics (and other disciplines concerned, say, with wellbeing studies, for example psychology). This represents the cumulative result of much research in various fields of religious studies. And it constitutes an ongoing field of activity, not least in terms of further testing and elaboration of the proposed model. It represents, probably, the heart of this thesis.

Yet the second part of the argument’s importance lies in the significance of locating this work in a historical context stretching back to the end of the last Ice Age, say around 13,000BCE, and forward to 2000CE. This illustrates how social development has gradually increased over that long period, in both the West and East, but how, highlighted by that context of continuing and evolving change, the developments in the last 200 years, from about 1800CE, represent the most remarkable changes in the whole of human history. This therefore illustrates and confirms the importance of the choice of the two following representative case studies engaging that decisive period from 1700CE to 2000CE, and drawn from the USA and UK, two nations at the forefront of such dramatic change. They illustrate what, how, and why Christianity has contributed to increasing human wellbeing.

I want to end this introduction with a picture from St Mary Magdalene church in Newark-on-Trent, Nottinghamshire (to the left of the text). It’s from the Markham chantry chapel dating from the early sixteenth century. It’s a remarkable survival given the targeted destruction of such chapels commemorating the dead particularly by Edward VI. It depicts a dancing skeleton flourishing a carnation and pointing to the grave, and next to it, a well-dressed young man with his hand on his purse. The pictures convey the warning that death awaits even the most well-to-do and wealth cannot buy him off! Both death and wealth were as much part of the late Middle Ages in Europe and much of the Middle East, as they are now. But with the most profound of differences which these two figures of death and prosperity signify.

Now death comes to most in old age, not as little children, and prosperity is no longer the prerogative of the elite few, but is increasingly the privileged possession of most people on earth. That’s called a better world of daily life for most people on earth.  And that’s a first, maybe the greatest first, in human history. And you can see why it is from that chantry chapel 500 years ago. 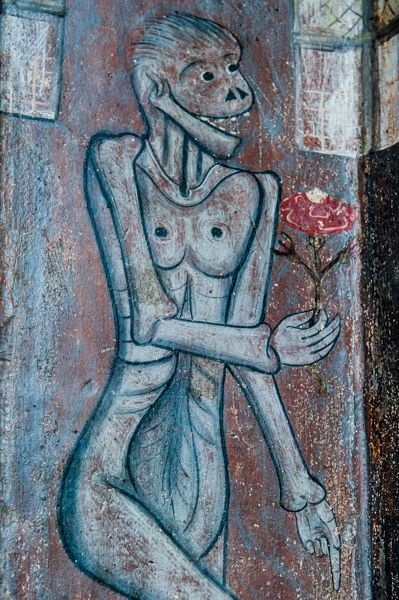 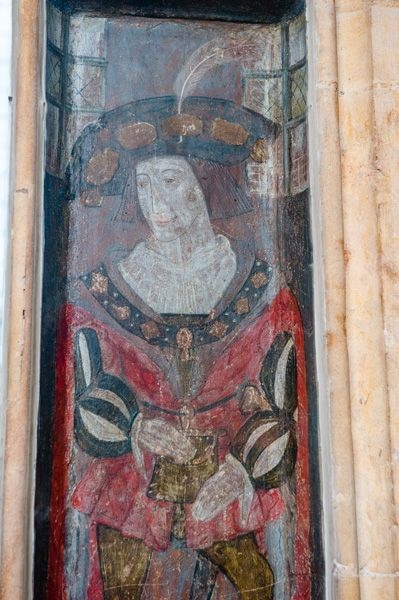