The Limits of Neighbourliness: Being a Good Neighbour Needs a Political Outcome

A timely and insightful report produced by the Church Urban Fund and Theos was launched in the House of Commons last week. Entitled Good Neighbours – How Churches help Communities Flourish, the report aimed to be a ‘critical appreciation’ of what churches offer their local communities.

There are some great ideas in this report. There is the idea of church-based social engagement providing a ‘stable place’ for both individual and community wellbeing and flourishing. Then there is the concept of church-based community projects as ‘hubs’ and ‘platforms’. In localities where church groups are often the last institution providing any form of community-based welfare, there is a growing trend for their projects to become spaces of gathering and debate which attract other citizens who not only want to become involved in practical help (‘to do something about something’) but also debate what sort of local communities we want to create.

The Church Urban Fund/Theos report helpfully deepens and refreshes what other commentators and researchers have been reporting from the field. A key point of connection with the work of the William Temple Foundation was their finding which showed the importance of worship and shared theological ideas as the motivating and driving force of faith–based civic engagement. This finding resonates with our definition of “spiritual capital” which emerged from research into church-led urban regeneration in Manchester in the early 2000s. We proposed that as a contribution to social capital, churches and other faith groups provide both religious and spiritual capital. Religious capital is ‘the practical contribution to local and national life made by faith groups’. Spiritual capital meanwhile ‘energises religious capital by providing a theological identity and worshipping tradition, but also a value system, moral vision and a basis of faith’. Religious capital is the ‘what’:i.e. the concrete actions and resources that faith communities contribute. The ‘why’ is spiritual capital: i.e. the motivating basis of faith, belief and values that shapes these concrete actions.

Meanwhile Church Urban Fund/Theos’ reference to the local  church as a platform ‘for neighbourliness, relationship and social connection’ whereby others from outside feel able to join in practical action for the sake of the local common good resonates strongly with ideas being developed around ‘progressive localism’ and ‘postsecular rapprochement’.  Progressive localism describes the potential of new political networks comprising of any groups who are prepared to be ‘outward looking and so create positive affinities between places and social groups negotiating global processes’. Postsecular rapprochement meanwhile, describes new spaces of partnership and encounter which involve  ‘a coming together of citizens who might previously have been divided by differences in theological, political or moral principles – a willingness to work together to address crucial social issues in the city, and in doing so put aside other frameworks of difference involving faith and secularism’.

I would have liked to have read more in the Good Neighbours report on the deeper political questions raised by its research. There is a danger that as faith groups become more efficient and indispensable to local welfare and service provision that we lose sight of a more joined up critique of the role of the state and the market, and the growing inequality and power vacuums their policies and practices are creating.

I also think more could have been made of the political potential for local faith-based leadership created by these new spaces of progressive localism and good neighbourliness. I believe the time is right to consider the strategic leveraging of the new political power that is being generated by the authenticity, integrity and knowledge base of the sort of the projects that Good Neighbours identifies, and which are being viewed with increasing admiration by those outside the faith communities themselves.

How might we do this? Well, emerging from our research on religious and spiritual capital, the Foundation identified three dimensions of faith-based engagement at work in the public sphere: being there; mainstream and alternative. The ‘being there’ dimension refers to those mundane spaces of engagement and support that religious groups offer to their local community as a seamless part of their everyday sense of mission and purpose. They contribute in ways that are organic, based on habit and personal contact; and which are distinctly low tech and volunteer-led.

The ‘mainstream’ dimension described the type of engagement where religious groups formally accept that they will partake in state initiatives or partnership schemes; they will bid for government contracts, or apply for government training funds in order to fulfil government-led targets and initiatives as part of a strategy that forms bridges and connections beyond the confines of membership. They will often employ professional workers and managers.

The ‘alternative’ dimension seeks to tap into both volunteer and professionally based knowledge, but puts the views and experience of the stakeholder much more to the fore. It is flexible, responsive, and highly entrepreneurial as well as technically skilled. In terms of social capital theory, its desire to challenge some of the dominant forms of political economy that trap people in cycles of poverty and inequality, means that it exemplifies linking social capital – i.e., brings resources of knowledge and funding and education to those most powerless in society so that their capital assets can be enhanced to bring about deep and more permanent change

Since we first developed these ideas, we now know that austerity will continue as a government policy until 2019. This means that the ‘mainstream’ dimension will more or less disappear, thus making the ‘being there’ and ‘alternative’ dimensions more significant. I would contend that we need to develop much more of an explicit link between the political leverage associated with ‘being there’ and use that political leverage as part of a national debate on the importance of creating an alternative idea of politics and alternative social order. We need to give voice to a critique of neo-liberal capitalism and the idea there is no alternative to the social order currently on offer. But this can only happen if churches and other faith groups grasp the opportunities to capitalise on their new credibility and proactively take a lead in being political hubs around which others can coalesce.

There seems to be a growing consensus that the state simply exits to provide the barest of safety nets and to provide this with as much unpleasantness as possible. I disagree with this profoundly and would argue instead that, in one of the richest global economies, the role of the state is to be much more of an ‘enabling’ one. William Temple envisaged the state not as a safety net but as an active progenitor of intermediate and networked communities of interest and shared concern. Localism doesn’t just happen on its own – it needs nuanced, careful, and strategic investment and support from the state in a rhetoric that moves away from stigmatisation and ‘shirkers vs strivers’ and starts from a stance of recognising the intrinsic value and worth of every human being, made in the image of God. Thank you Theos and Church Urban Fund for highlighting case studies of ‘good neighbour welfare’ and the ‘being there’ that does this. But going about this work quietly, or in ways that assume the current status quo, will never change a punitive and unsustainable vision of society.

Chris Baker is Director of Research for William Temple Foundation 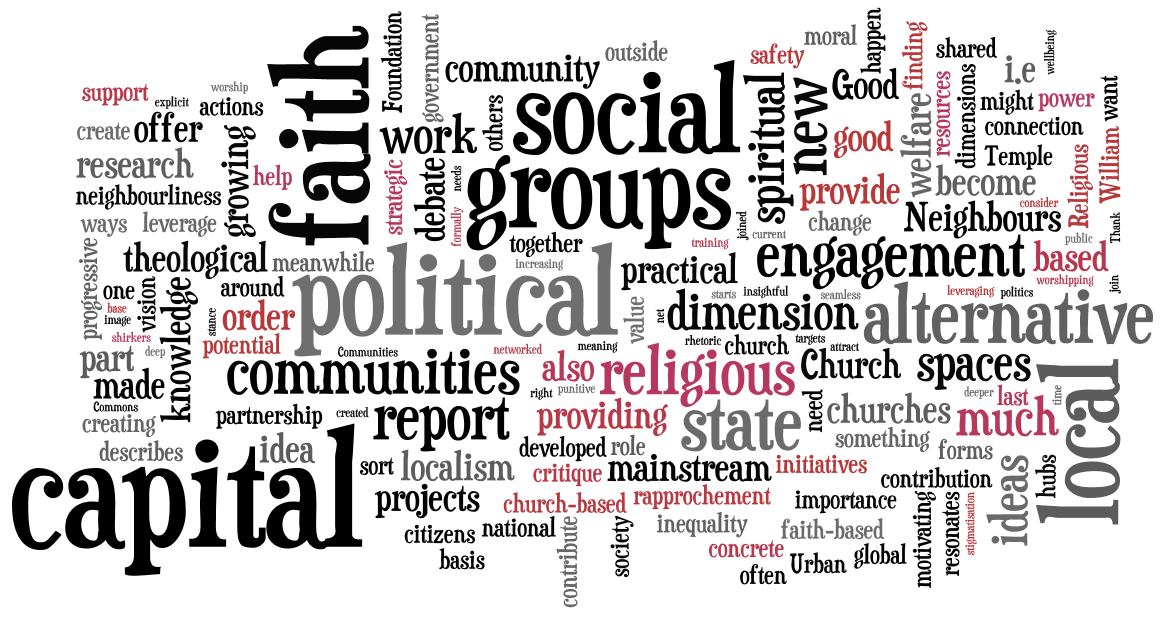