At the William Temple Foundation Chris Baker and I have made much of the importance of religious and spiritual capital in the context of faith based local involvement and partnership work. The definitions we have used so far go like this:

Religious capital is, ‘the practical contribution to local and national life made by faith groups’. Spiritual capital meanwhile, ‘energises religious capital by providing a theological identity and worshipping tradition, but also a value system, moral vision and a basis of faith’. Religious capital is the ‘what’: i.e., the concrete actions and resources that faith communities contribute. The ‘why’ is spiritual capital: i.e., the motivating basis of faith, belief and values that shapes these concrete actions.

In our discussions and ponderings we have mused about the nature of this spiritual capital: is it reducible to psychological terms within the heads and hearts of believers, or is there some reality of the idea of God at work or immanent in these processes? In Christian terms this would be linked to the work of the Holy Spirit, indwelling in believers, and equipping them with spiritual gifts to do the work of God. But maybe also the Spirit is at work in the world beyond the church – as in the Genesis account, “brooding over the surface of the waters”. John Taylor explored this idea several decades ago in his classic book The Go Between God.

In a multi-faith setting a publicly accessible theology of spiritual capital becomes even more complex, and some Christians would undoubtedly want to argue that there is something unique about the Holy Spirit at work in and through individual Christians and in the church. But spiritual capital also resonates with a religious culture in which spirituality is popular and religion is not. Paul Heelas and Linda Woodhead explore this in The Spiritual Revolution: Why Religion Is Giving Way to Spirituality.  Inevitably in our individualistic consumer oriented society “spiritual capital” will tend to be read as associated with the spirtual life of the individual. Here I want to argue that this is a mistake and that we will do better to look at spiritual capital as a collective property. Indeed a careful reading of spiritual capital, such as in Chris Baker’s article on moral freighting and civic engagement, makes it clear that we think of spirtual capital as grounded in social relationships in communities of faith.

Putnam and Campbell in American Grace seek to trace the dynamics of believer’s pro-social involvements in casual good neighbouring and in more purposeful associational life for the benefit of the community. Working with the well known theory of social capital – as developed by Putnam – they pose the question of the role paid by believing and belonging in driving good citizenship. The evidence comes down in favour of belonging, the strongest correlations seem to be with church attendance or religious participation and civic engagement, more or less regardless of what a person believes.  Putnam and Campbell

………. suggest it is down to something they call “moral freighting” whereby individually based propensities for altruism, already shown to exist more in religious people, become connected to other religious/spiritual individuals of similar propensity. This connective process “tends to evoke peer pressure for you to do good deeds as well” (i.e., to “freight” or carry over your moral codes into actions undertaken in the public sphere), (Baker 2013).

To any practitioner in faith based community work this is hardly a surprise. Volunteers or social action projects linked to a church most readily come from church congregations, where people who know each other well through their weekly worship and fellowship, either initiate, or are recruited – often as a group – to work together in an activity that serves the “needy” they have recognized in the locality of the church.  It is much harder to recruit outsiders to join such projects, or to persuade faithful church members to offer voluntary service through an existing organisation outside the home church. In the absence of strong research evidence or personal experience of involvement in other faith communities it is impossible to determine if these dynamics apply universally.

However, a recent survey by the Evangelical Alliance on the theme “who is my neighbour?” offers at least tangential evidence that this is the case among evangelical Christians.  Some 59% of the respondents said they were actively involved in at least one church social action or community outreach project. The most common types of projects were food banks, work with elderly people or families, youth outreach work and homelessness ministries. However only 21% were actively involved in a secular project or activity, among which work with people with disabilities or learning difficulties or hospices was the most common; significantly those fields in which professional – and secular – medical input could be valuable.

However it is in some of the comments reflecting the ethos of such work that we see much deeper into the evangelical brand of spiritual capital.  We have only space for one example, though many other respondents expressed similar ideas.

There are many very close inter-church projects in the community.  Debt advice, prayer, Street Pastors, healing rooms, extensive schools work, on street prayer, food bank and other projects being prayed over.

The striking things here are the juxtaposition of prayer and anti poverty work, and the strength of the inter-church partnerships. Indeed most of the churches where the survey respondents attend partner with other churches on social action or mission projects, both locally (82%) and overseas (75%). While partnerships with Christian organisations are also frequent (59%), only about a third go to a church which partners with secular charities or the local council, and less than one in ten where there is an in interfaith partnership.

The clarification of our notion of spiritual capital means that for some Christians at least it is more of a shared corporate ethos than an individual motivational force. It is based on shared values and plausibility structures, and definition of religious boundaries. It is expressed in a shared commitment to mission, which is strengthened by a shared commitment to prayer and the regular rehearsal of these values by collective worship, preaching and shared reflection on the scriptures. Perhaps it is for this very reason that some Christians (especially Evangelicals) find it so hard to take their spiritual capital out of the cocoon of the Christian sub culture, and to express their faith explicitly in the secular world. Perhaps this too is why partnership with secular bodies is so challenging and why secular actors find it so hard to comprehend and fully engage with the efforts of churches and other faith communities, unless on a purely instrumental and contractual basis. 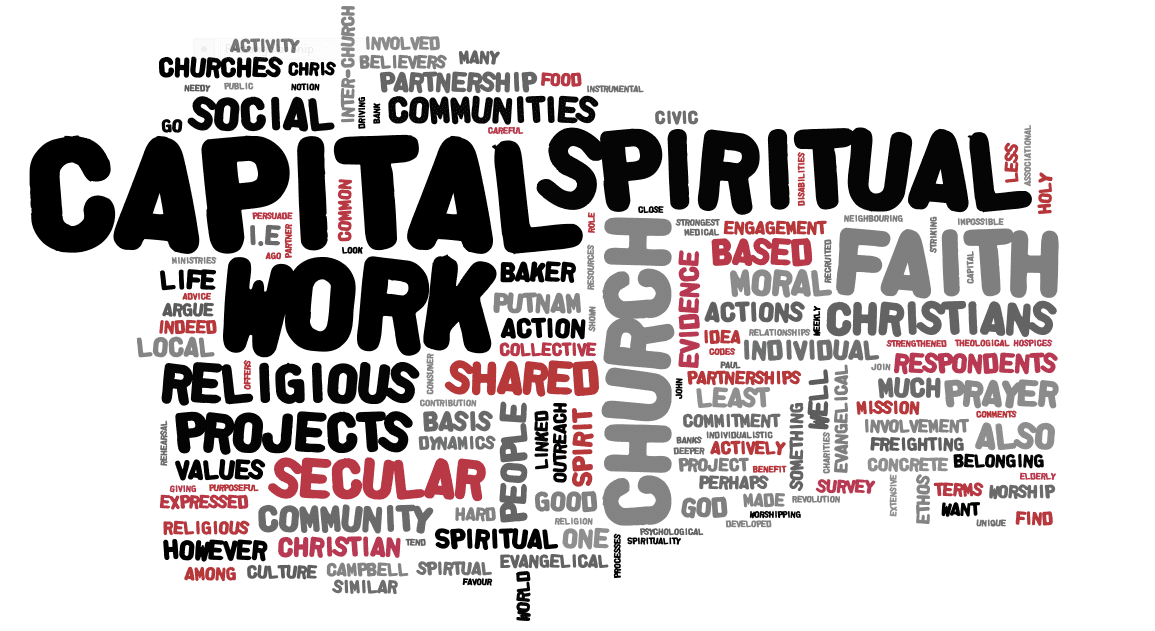