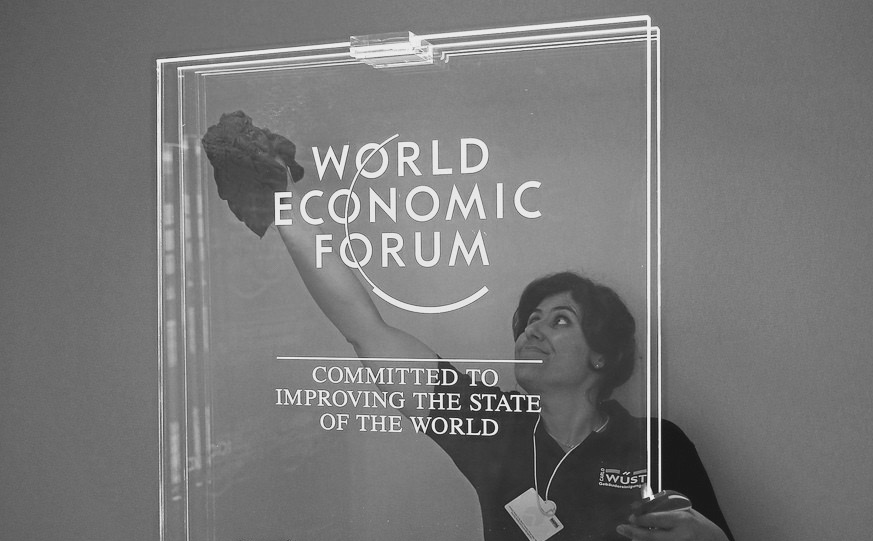 As the World Economic Forum packs up for another year, Eve Poole proposes an action plan for virtue and a Corporate Lent.

Let’s imagine you’re the local vicar. It’s January. The roof is leaking again, and the post-Christmas lull is taking its toll on the collection plate. Imagine if you could rent out your church for just four days mid-week, for £250,000? That’s pretty much what the English Church in Davos did last week, when the 48th World Economic Forum Annual Meeting took place in their small village in Switzerland.

Each January, the WEF aims ‘to rededicate leaders from all walks of life to developing a shared narrative to improve the state of the world.’ This year, instead of celebrating Burns Night in Scotland, 3,000 of the global elite from business, finance, politics and public affairs went to Switzerland to be part of Creating a Shared Future in a Fractured World. The local private jet booking service was said to be expecting around 2,000 private flights in and out of Davos, with flights there from London costing over £10,000 plus another £3,750 for the helicopter transfer.

The town is about the size of Ilfracombe, so it is somewhat dwarfed by the WEF influx, and everyone needs space. All the locals move out, and most of the shops become pop-up venues for corporates. Apparently this year Facebook rented land to build its own venue, a three-storey house to hold events hosted by Mark Zuckerberg. The English Church has been rented out by a Danish fintech firm and transformed into a venue called The Sanctuary. Sponsored by CNBC, its aim is to bring together ‘the biggest, most influential and innovative names in business, politics, and entertainment to talk about the biggest issues of today’.

I was invited onto the BBC World Service to debate one of those big issues: Inequality. But as the programme aired at 3.06am on the Saturday morning, you may have missed it. I was part of a panel from London, Washington and Davos, discussing whether or not inequality matters, and what we might do about it. For me, inequality is an issue of deformed power, but also an opportunity for us to look in the mirror and decide whether we like what we see.

The 2018 Oxfam Global Inequality Report admits that there is some good news for those at the bottom. Between 1990 and 2010, the number of people living on less than $1.90 a day halved, and continues to decline. However, at the top the picture remains extreme: 82% of global wealth is held by just 1% of the global population. And this will only get worse. As Thomas Piketty has so elegantly pointed out in his seminal book Capital in the Twenty-first Century, returns from capital investments tend to outstrip economic growth. Over time, this acts as a ratchet on wealth, exponentially accelerating the gap between the haves and the have-nots.

Even if the poor are getting richer, it matters if the rich are getting comparatively and exponentially richer, not because of envy, but because this concentration of wealth also concentrates power. And power affects government priorities and policy, so it affects us all. And this is not just about obvious areas of policy like bank bailouts and tax cuts, which lead to cuts in public spending on health, education and welfare. It is also about the kind of markets we create, where it seems easier to buy eye-wateringly expensive handbags than it is to get clean water and life-saving drugs to the poor. More than that, though, these stark figures give us all a choice. Do we like this disparity? Do we want this kind of bifurcated society? What would we have the WEF do?

The English Church in Davos, now the Free Protestant Church, was originally dedicated to St Luke, the physician. This was no accident. Historically, most of the congregation consisted of patients suffering from tuberculosis, who had come to take the air. This was rather lucky for the church, which prospered. Gratitude for healing, or memories of those who had died, prompted many to donate generously. Even Robert Louis Stevenson wintered there in 1880. And it is from St Luke’s gospel that we get the phrase, “Physician, heal thyself.” Many globally would like those attending Davos to get their own houses in order before they start telling the rest of the world how to improve. As Branko Milanovic puts it: ‘They are loath to pay a living wage, but they will fund a philharmonic orchestra. They will ban unions, but they will organize a workshop on transparency in government.’

Does anyone at Davos really want to be more virtuous? If so, I’d like to suggest an action plan for virtue. It’s the idea of a Corporate Lent. Lent is one of the last public traditions that is about schooling people in virtue. For 40 days we are encouraged to pick something either to stop doing, or to start doing – give up alcohol, stop swearing, help grannies cross roads. Yes, maybe because of the ‘reward’ of Easter eggs, but not really. Would you give up all that vintage claret for a few scraps of chocolate? Mostly people do it because it’s good for the character. Keeping Lent reassures us that we have some will-power, and can behave well if we really try hard enough.

So what might a Corporate Lent resemble? Pay all your invoices within 28 days? Source local? Take on some mentally challenged workers as well as your physically challenged ones? The best place to start would be to crowd-source ideas for virtue pilots from your co-workers, your supply chain, your community, or your customers. The joy of Lent is that it’s only 40 days, which cashes out as just over 30 working days once you exclude weekends and the odd bank holiday. Just six weeks to experiment in better ways of being corporately virtuous. And individuals could choose their own mini-projects. Fewer emails and more face-to-face? Less gossiping? Better listening?

This year, Lent starts on 14 February. So will you be my Valentine, and take up a Corporate Lent this year?