Who will create the spaces where all voices can be heard?

I am not likely to forget the morning of June 24th. The evening before I was in Worcester Cathedral listening to my colleague Prof Chris Baker delivering the opening address to the joint Worcester University and William Temple Foundation conference on social justice to commemorate 75 years since the first Malvern conference. Chris talked about the legacy of Temple and the 1941 conference, suggesting that what faith now has to offer to the public square is a vision of reconnection in an age of accelerating disconnection.

I awoke the next morning to receive an email from a distressed friend and colleague about the result of the referendum. I had somehow convinced myself that the vote would be to remain. The atmosphere in the university as people began to gather for the first keynote session was one of disbelief, depression and even barely suppressed anger. Then just before I moved off to the opening session the message came through that John Atherton had passed away earlier that morning. How much worse could a day get? It felt as though worlds we had known and taken for granted had been swept away overnight and it left me feeling as though I no longer knew how to get my bearings. A week later and things do not seem much better. A morning to forget but never to be forgotten!

Fortunately, the content of the conference began to lift the spirits – and hopes. In addition to the four keynotes on the subjects of health and social care; ageing in contemporary society; a New Materialist approach to education, and then Philip Goodchild on Temple and the role of debt in our economy, there were some excellent and thought-provoking presentations by other contributors. Some of these are being gathered and will be published in a conference edition of the Journal of Beliefs and Values at the end of the year.

Much was made of the Temple tradition, albeit in a critical vein, and I wondered what John Atherton would have made of this. Had he been fit he would have been there himself and offered his own particular perspective.

But the tenor of the conference was less about paying tribute to the past and more about looking forward to an uncertain future, and the events of the previous 24 hours added to the importance of that theme and the subsequent discussions. By the close it was clear to us as the organising committee, that this had only been the beginning of a process and that more now needs to be said and thought through.

In the midst of the turmoil created by the Brexit decision and the ensuing unseemly sight of the major political parties descending into personal rivalries, it would appear that what is lacking is the space for an open and honest public debate. How can there be any reconnection now that the fault lines in our society, culture and politics have been so clearly brought to the surface? But perhaps that is what has to happen if progress is to be made? As some have commented, the cracks were there beneath the surface, whether we are talking about the failings of our economic system, attitudes towards others, the general disenchantment with professional politics let alone the sense of disenfranchisement of those at the sharp end of the policies of recent decades. These underlying echoes have now been given a voice so it should be no surprise that they have registered their discontent by the only means available to them. If something new can be born from this radical disconnection, then maybe, just maybe, a different and better way forward can emerge.

With that hope in our hearts and minds, and with another voice from the Foundation ringing in our ears not to be too idealistic, we intend to move onwards exploring the themes and ideas that emerged from the Worcester conference. Although the individual issues raised, ranging from gender equality, welfare provision, economic policy, to the environment are each of critical importance, what seems to be most urgent is to create that space within which all can feel their voices will be heard. We have a hope that faith groups can both contribute to, but also – as Chris Baker would say – “curate” those opportunities. Not dominating nor even setting agendas, but helping to set up those safe spaces where the reconnections can at least begin. If Malvern 1941 in the midst of the turmoil and uncertainty of that crucial period in the conflict at least facilitated that process for that generation, perhaps Worcester 2016, and even June 24th, can be part of a process for our own time, one that pre-empts the most damaging consequences of our divisions and prevents us slipping back into “business as usual”.

With the voices of Temple and Atherton urging us on we have to move forward in more radical and creative ways, pursing paths that even they could not have foreseen. 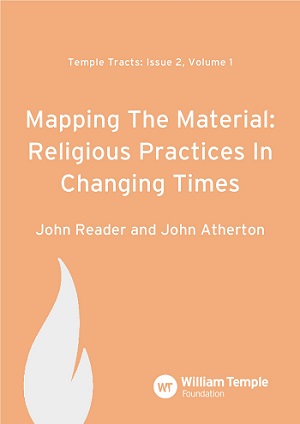 by John Atherton and John Reader is available to download now >>

Reconsidering Consumerism: Getting Greedy for God
by Eve Poole

Candle in the Wind: Can Public Ritual Help Create a More Peaceful World?
by Chris Baker