Working For A Politics Of Hope In An Age Of Uncertainty

Much has been written in the past week about the unresolved relationship between religious and secular identities, as well as on freedom of speech in a pluralistic democratic state. There is huge uncertainty as to what the traumatic events of the last few days herald for the future direction of France as a nation (and indeed Europe as a whole). Will France become a nation that learns to be at ease with diversity, and especially the right for religious identities, practices and discourses to be visibly expressed in the public sphere? That seemed to be the overwhelming sentiment of the millions of French citizens from all backgrounds who gathered to reclaim the public space in the name of tolerance, inclusion and fraternity over the weekend.

In contrast, there is still the possibility for France to become a nation unable to address the complexities of past-colonial histories and rapid change, allowing the loud (but minority) voices of division and simplistic ‘them and us’ rhetoric to prevail? This latter voice holds little prospect of moving forward – it is a politics based on regressive (i.e. inward looking) fear, rather than progressive (i.e. outward looking) hope.

Although extremism is not its explicit focus, William Temple Foundation’s forthcoming conference on the theme of Politics of Hope: Exploring the role and impact of faith-based leadership in local communities goes right to the heart of the issues of the past week. Namely, how do we construct a local progressive politics of hope that works across ideological and cultural divides to produce outcomes that reflect the common aspirations of most citizens for a just, inclusive and flourishing state?

The conference is a joint initiative between the Foundation, the Church Urban Fund and the Joint Public Issues Team, and has two main aims:

The first is to highlight the increasingly significant role of progressive (i.e. outward looking) local religious leadership for those in government and local authorities. Faith groups are generally one of the most effective and trusted catalysts for progressive social change, especially in communities facing the greatest deficits in public services as a result of austerity politics. The sort of questions we will be exploring are: Are faith groups now the catalysts for progressive alliances across faith and secular divides? How might the policy landscape change if this narrative was openly discussed as part of a debate on new forms of political engagement and activism?

The second aim is to inspire and create new thinking within faith groups themselves as to the possibility of playing more upfront roles as political leaders and facilitators. This, it is hoped, will enhance their confidence and creativity in the face of misunderstanding and occasional mistrust from some (but by no means all) secular agencies.

The conference will meet these aims by creating an interactive event in which three examples of faith-based welfare will be presented, followed by a facilitated reflection process that will allow the full impact of these projects to emerge: what has changed since 2008; who is volunteering within the spaces provided by faith-based welfare and social care; how should we define impacts; what can we learn about good practice?

The three case studies that will shape the thinking and refection of the conference are: an ecumenical community project pioneering innovative experiments in building local community in Hodge Hill, East Birmingham, presented by Rev. Al Barrett; Eat n Meet – a food programme for homeless and vulnerable people in Leicester run by the local Muslim community and presented by Salma Ravat; and an exploration of alternative economies focussed on justice/shalom and based on the establishment of a local currency called the Bristol Pound, presented by Chris Sunderland.

The conference concludes with a free public lecture by Steve Chalke MBE who is the founder of Oasis UK. His lecture, based on the title of the conference, will explore how faith groups are taking up the challenges and opportunities presented by the shift to an austerity-localism landscape and the tensions and pitfalls this involves: how to be both authentic and inclusive; how to model best practice for others; how to address structural inequality whilst caring for the individual; how do we understand the new covenant between the state, the market and civil society; what is the role of religion in all of this?

The main question that I will be bringing to the conference is this: Will the new forms of engagement and solidarity epitomised by these case studies help identify the path ahead for a progressive localism that seeks to create flourishing and resilient communities for all? Or will the goodwill, hard work and creativity of both the faith sector and wider community and voluntary sector be cynically co-opted by both the state and the market as a way of providing social care on the cheap, and which leaves fundamental structures of inequality unacknowledged and unchallenged?

Come along and have your say. We would love to see you

Building a Politics of Hope will be held on Tuesday 24th February in central London. Click here to book tickets. 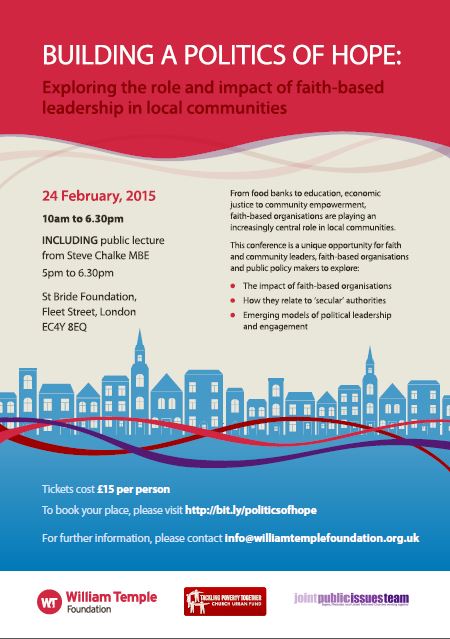