Greg Smith offers a probing review of this edited collection of essays on Brexit from an Anglican perspective.

Jonathan Chaplin and Andrew Bradstock have done an excellent job in bringing together a wide range of church leaders, politicians, economists and theologians to present a diversity of perspectives on post Brexit Britain and the place of the Church of England within it—in a process which William Temple would recognise. That said, the editors admit that too many of the contributors are white, male, and from an older generation.

There could never be an ideal time for writing or publishing such a book, but the autumn of 2020 may have turned out to be particularly awkward, falling within the middle of a pandemic that has changed national life and a few months before the final rushed exit deal came into force. The latter especially has profound significance for the UK, with the border that is not a border in the Irish Sea, and the upcoming Scottish Parliament elections. For the church, Brexit continues to divide and raise questions. Inevitably the quality of the chapters varies, and on such a divisive topic, most readers will find things to make them angry as well as delighted. I should also disclose that I was a firm supporter of Remain.

The editors note that a number of the contributors take the line that membership of the EU was not primarily a theological issue. While Malcolm Brown argues, as an institutional insider, that neutrality and lack of comment was a studied position of the House of Bishops, it seems clear to me, and to others like John Millbank, that statements by two archbishops and numerous clergy were making a clear case for Remain. Perhaps it was only a weak and pragmatic economic case, rather than a moral one in line with the Catholic Social Teaching that had inspired the founders of the EEC to be Christian peacemakers in the immediate post war era. In any case, the exit polls in 2016 showed clearly that people who identified as Church of England were significantly more likely than average to vote leave; that Christians as a whole were as divided as the whole electorate; and that the more committed to Christ and involved in church life a person was, the more likely they were to vote Remain. Four years on the political disagreement remains, though most of the contributors promote the role of the national church as a ministry of reconciliation. Graham Tomlin’s chapter focusses on this and draws from the history of England’s post Reformation religious settlement, in a controversial reading of history which I critiqued in an earlier blog.

Personally, I would argue that some of the issues over Brexit are theologically and ecclesiologically fundamental where they touch on peace and justice, and in particular on national identity and race. One of the few chapters which seems to delve deeply in scripture and theology comes from Sam Norton. His readings are from a strongly nationalist perspective and, to my mind, don’t make a clear enough distinction between the “ethnos” concept of Scripture and modern nation states, giving little room for the New Testament emphasis on a multinational people of God who are citizens of heaven in exile in various earthly empires. Norton also implies that the Leave vote was the action of a sovereign God, who is pleased with the result and displeased with church leaders who supported Remain. In my view, David Muir’s chapter and Anthony Reddie’s short response (summarising key points of his recent book) are much closer to the uncomfortable truth: that Brexit was driven through by an appeal to post-Imperial nostalgia and English nativism. The chapters offering perspectives from Wales, Scotland and Ireland, plus a couple from Europe, tend to reinforce the Englishness of the decision, and the sense of effortless superiority characteristic of the tribe and, indeed, the Church of England.

Poverty is an important theme that surfaces in the Brexit debate with the suggestion that the Leave vote was a revolt of the left-behind working classes in the North and Midlands. Sam Norton and Philip North are correct that the church needs to listen to the voice of the poor. Yet it would be unwise to interpret Brexit solely in terms of economic inequality; after all, the Leave campaign was financed by the rich and supported by huge numbers of affluent, middle-class, white, older people (especially men) across the country. Meanwhile, the urban poor in multi-ethnic areas of London, Manchester and even in specific “Asian wards” of Blackburn tended to vote Remain. There is little reason to hope that the fortunes of poor people, be they white or from ethnic minorities will be improved post-Brexit, especially with the economic devastation wrought by the pandemic.

Other chapters cover issues of prudential judgement around politics and economics and raise some significant points about the nature of democracy, the British constitution and the distribution of resources in a post Brexit UK. Brian Griffiths, makes the most cogent and graciously phrased case for leaving the EU that I have read, giving a generous mention to Ronald Preston and John Atherton. The final section of the book offers space for reflections on the substantial chapters from professional (ex)politicians of different party backgrounds and varying Christian commitments. There are reflections too from some Christians outside the Church of England. Doug Gay’s three-page review is a masterpiece; if you are only browsing in a bookshop this is the section to read. Having read the book as a Church of Scotland minister, he summarises what has been said, shows why and where disagreement remains, why the country is in a mess, why the tensions over national identity are central to the problem, and why the Church of England needs to reconsider its role. 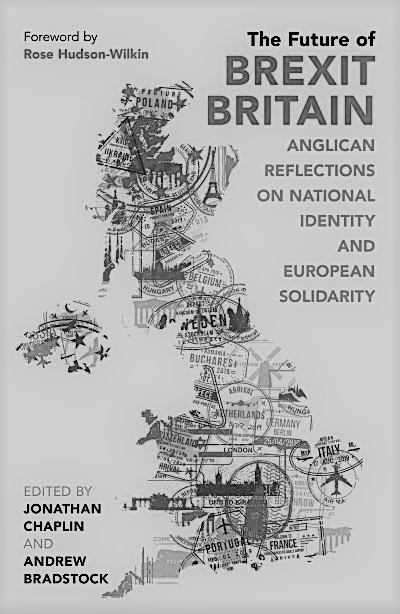