Review of ‘Future Politics: Living together in a world transformed by Tech’ by Jamie Susskind

Dr John Reader, Honorary Senior Research Fellow here at the William Temple Foundation, reviews Jamie Susskind’s bestseller and argues that wise and transparent restraints on our use of technology are needed sooner rather than later.

The premise of ‘Future Politics’ is that relentless advances in science and technology are set to transform the way we live together with consequences that are both profound and frightening (p. 1). We are not yet ready for the world we are creating. Politics will not be the same as it was in the past.

Susskind assumes that the distinctions between human and machine, online and offline, real and virtual will fade into the background. For Susskind, three changes are of particular note: increasingly capable systems that are equal or superior to how humans function; increasingly integrated technologies that are embedded in the physical and built environment (the internet of things); and an increasingly quantified society, whereby details of our lives are captured as data and processed by digital systems. Those who control the technologies will exercise power over us, set the limits of our liberty, and determine the future of democracy—it is their algorithms that will decide vital questions of social justice (p. 3). One of the problems is that the engineers devising and implementing these technologies rarely engage with consequences of these developments.

So, it is up to the rest of us to correct this deficiency and take responsibility for understanding and analysing the implications of this transformed world. We must, says Susskind, engage with political theory if we are to think critically and develop appropriate intellectual tools to tackle these digital developments. With this as the agenda, Susskind sets out to examine this future under the headings of power, liberty, democracy, justice and politics itself, devoting sections of the book to each of these subjects in turn.

In Part Two, Susskind devises three categories for discussing future power: force, scrutiny and perception-control (p. 89). The big tech companies, and government agencies who work with them, will be in control of developments and thus possess the power, while the rest of us will be relatively powerless.  Susskind writes:

“[T]he shift from law enforced by people to law enforced by technology means that power will increasingly lie in force rather than coercion, with self-enforcing laws that cannot be broken because they are encoded into the world around us.” (p. 105)

This is a really important insight. The following chapter on scrutiny is also perceptive and helpful as Susskind brings more distinctions into play: this time between scrutiny as intimate, imperishable, predictable and rateable (p. 127). The cumulative impact of this scrutiny will construct a world unlike anything we have experienced hitherto. Where we go; what we do; what we purchase; what we write, read and say; let alone who and what we know, and our work and ambitions will all be the subject of scrutiny (p. 129).

Part Three, on future liberty, brings us to what I think is the most valuable section of the book. Susskind offers a new conceptual framework to aid our thoughts about freedom, and he proposes the following categories: digital libertarianism, digital liberalism, digital confederalism, digital paternalism, digital moralism and digital republicanism (p. 164). When law enforcement agencies start deploying algorithms to predict who is likely to be engaging in criminal activity there are huge questions about how our freedoms are going to become more restricted, let alone about how deterministic some of these processes are in danger of becoming. Morality itself could become automated if we are not careful.

How then are we to approach the subject of freedom in this new context? Referring to his various categories, Susskind suggests that digital libertarianism means freedom from technology (p. 205); no one should be forced to use the technology in the first place. Freedom begins where technology ends. Digital liberalism is a more nuanced stance where technology is engineered to ensure the maximum possible individual liberty for all. This is the “wise restraints” approach. Digital confederalism would enable people to move between systems according to which code they prefer—so there needs to be a plurality of digital systems available in order to be able to do this. Any private or state monopoly would make this impossible. Digital paternalism and digital moralism hold that technology should be designed to protect people from the harmful consequences of their own actions or to steer them away from lives of immorality. It is digital republicanism, however, which seems to be the most constructive and interesting of the options that Susskind presents. By this he means that nobody should be subject to the arbitrary powers of those who control digital technologies. This requires that we understand how these technologies function, the values they encode, who designed and created them and for what purpose. Even more radically, but I think crucially, we should actually have a hand in how these technologies are developed so that we are not simply passive consumers. Transparency, accountability and participation are fundamental to this approach: “programme or be programmed”.

The final sections of the book present Susskind’s arguments about justice and politics itself, containing helpful discussions on algorithms of distribution, algorithms of recognition, algorithmic injustice and issues of unemployment and wealth. The message is a consistent one: that digital technologies are never neutral tools but are always designed and deployed for specific purposes and controlled by the tech firms in ways that may, or may not, lead to greater transparency and democracy.

Although Susskind claims that he only aims to outline the territory and some possible options, he does clearly favour digital republicanism as the best way forward, arguing—correctly, in my view—that we need to be able to understand and shape the powers that will govern our lives (p. 347). We need to get working on the “wise restraints” required to ensure transparency and accountability.

A Pedagogy of Hope: Anti-Racism, Inclusion and Diversity in the Church by Sanjee Perera and Simon Lee 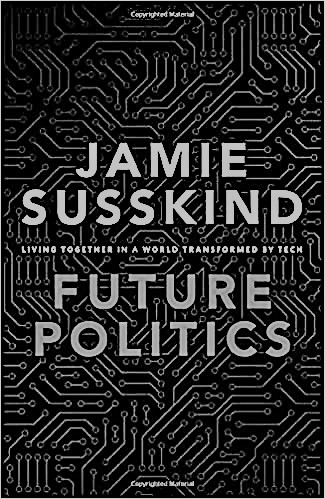