In this extended article, William Temple Scholar Matt Stemp urges us to see how radical honesty is changing the landscape of climate activism.

Welcome to the new landscape of climate activism.

In just a few short months, hundreds of thousands of people have been rising up in protests around the world. And this new activism looks very different to the climate activism of the last two decades. Activists have begun to recognise that the tried and tested campaigning methods are not working. Polite emails to MPs, petitions for incremental measures to reduce carbon emissions, cleverly-marketed appeals for individual behaviour change, and A-to-B marches in capital cities have not led to significant change. Global carbon emissions are still increasing, now at 2.7% a year. This fact alone is enough to tell us that the climate activism of old has sadly failed.

So, what has sparked this revitalised climate activism? One factor is clear: a new-found commitment among activists to radical honesty. Three truth-telling moments stand out as catalysts of this dramatic shift in the public climate conversation.

The first moment came in July 2017 with the publication of an article in the New York Magazine that went unexpectedly viral. Reaching over a million readers, The Uninhabitable Earth by David Wallace-Wells expressed the possibility of climate breakdown in the starkest possible terms. Sub-titled ‘Famine, economic collapse, a sun that cooks us: What climate change could wreak—sooner than you think,’ the article broke all the previously-accepted rules of climate science communication. Hope, not alarm, was supposed to be vital in raising awareness of climate change if readers were not to be left in paralysing despair. But this piece, with its prediction of almost inevitable civilisational collapse if the present trajectory of increasing emissions is not immediately averted, refused this well-established consensus. 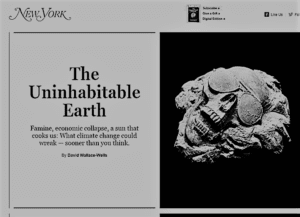 The argument of The Uninhabitable Earth—now published with the same title in extended book form—helped to clear the way for US-based climate activism to find a new lease of life amidst a hugely resistant political context. Far from leading to paralysis, the acceptance of a climate emergency has led to massive mobilisation and a sense of agency. To give just one example, the 29-year-old, recently-elected congresswoman Alexandria Ocasio-Cortez has become, almost overnight, the most influential politician in the US, putting the climate change emergency at the front and centre of her call for a Green New Deal. Her campaigning, supported by the youth-led Sunrise Movement and their tactic of occupying government offices, has completely reshaped the debate within the Democratic Party. Climate change could now be the issue that decides the 2020 presidential election.

The second moment, a year later, came from the most unlikely of people. Greta Thunberg, a 15-year-old girl with Asperger’s Syndrome, went on strike from school in protest against the inaction of the Swedish government. “The adults have failed us,” she said. “And since most of them, including the press and the politicians, keep ignoring the situation, we must take action into our own hands.”

Far from being a disability, Greta Thunberg believes her Asperger’s has enabled her to speak in the black-and-white terms that the climate situation demands. Her voice, more than any other, has cut through the noise to reach the generation that will be worst-affected by the consequences of continuing to burn fossil fuels. Now, hundreds of thousands of young people are taking to the streets every Friday, striking from schools and universities across Europe, the UK, the US, and elsewhere. Last week’s international youth strike drew mass media attention.

As well as expressing the urgency demanded by climate change, Greta Thunberg’s rhetoric has been most effective in uncovering the inaction and complicity of even progressive national governments like those in Scandinavia. Her message is grounded in a basic but powerful appeal to intergenerational justice. Governments around the globe are failing in their responsibility to ensure that today’s teenagers can become adults on a planet capable of sustaining their lives. The negotiations among governments internationally, resulting in the Paris Agreement in 2015, have not resulted in sufficient commitments to reduce carbon emissions to (net-)zero quickly enough, even if those commitments were to be fulfilled. National governments, subservient to the money and influence of the fossil fuel lobby, are undermining the possibility of young people growing up and flourishing in a safe and secure future. No wonder students are rising up en masse.

The third moment is the most controversial. Exemplified by the new international movement Extinction Rebellion (XR), which started in London in October 2018, this moment of radical honesty centres around the question of what it means to act in the light of the truth. XR’s slogan is: “Tell the truth and act as if the truth is real.” XR’s claim is that if the climate situation is urgent, and governments are complicit in the failure to respond, then (since everything else has been tried) the only course of action commensurate with the truth is mass civil disobedience. Inspired by the nonviolent direct action employed by the Suffragettes and the Civil Rights Movement, XR has begun mobilising and training thousands of people in local groups around the UK and internationally in pursuit of systemic change.

By balancing the desperate truth of climate breakdown with a strategy of creative civil disobedience, XR has enabled activists to inhabit an emotional space that embraces both grief and joyful solidarity. On the one hand, XR deliberately employs powerful symbols and rituals that are evocative of finality and death: the ‘extinction symbol’ displayed on flags and banners is an empty hourglass signifying that time has run out; and mock funeral processions have taken place in towns and cities around the country, mourning the extinction of species. On the other hand, the XR movement is infused with a playfulness that has been absent from previous incarnations of environmentalism. The lack of guaranteed success, and seriousness of climate change, has ironically liberated XR activists to embrace a mischievous sense of fun, hosting street parties on roads and picnics in branches of HSBC.

It remains to be seen whether XR will be successful in achieving its three hugely ambitious aims:

Nevertheless, XR has already been successful in changing the culture of climate activism, clearing the ground for the youth strike movement to emerge in the UK (which, unlike mainland Europe, has not traditionally been fertile soil for activism involving civil disobedience).

“In times of universal deceit, telling the truth is a revolutionary act.” – George Orwell

The radical honesty of the new climate activism, as I have described it, attempts to express the truth in a way that transcends and, in some ways, resists the limits of scientific precision. This mobilising form of truth is not equivalent to that found in academia, in the disciplines of climate science, psychology and political theory—though I would happily argue that it is consistent with the key insights of these disciplines. The truth of the new climate activists is far more encompassing.

The truth of climate change seems to be finally getting through, I believe, not because correct information is being accurately presented to the public and to those in positions of power—that has been tried and tried again, to no avail—but because climate change, for the first time, is being expressed not merely in words, but in emotions, desires and actions. The honesty of the activists is a rhetorical, affective, symbolic, existential honesty. Climate activism has, at last, found ways to tell the truth about complex, scientific assessments of probable futures, and started to translate it into an embodied representation of a political future that has a chance of being realised.

What this means, I think, is that the new climate activism opens up the possibility of a transformation in the nature of contemporary politics itself. In the face of likely catastrophe, these climate activists are courageously asking fundamental questions not just about what it will take to survive the 21st century, but about what it means to be human together. Their honesty is expressed above all, I think, in the new alignment that seems to be forming across party political lines and amongst a plurality of religious and non-religious perspectives. Against the deceit and denial that defines contemporary politics in the age of Trump and Brexit, these activists might be carving out a course not just towards a stable climate, but a more honest politics.

Isn’t that reason enough to join the revolution? 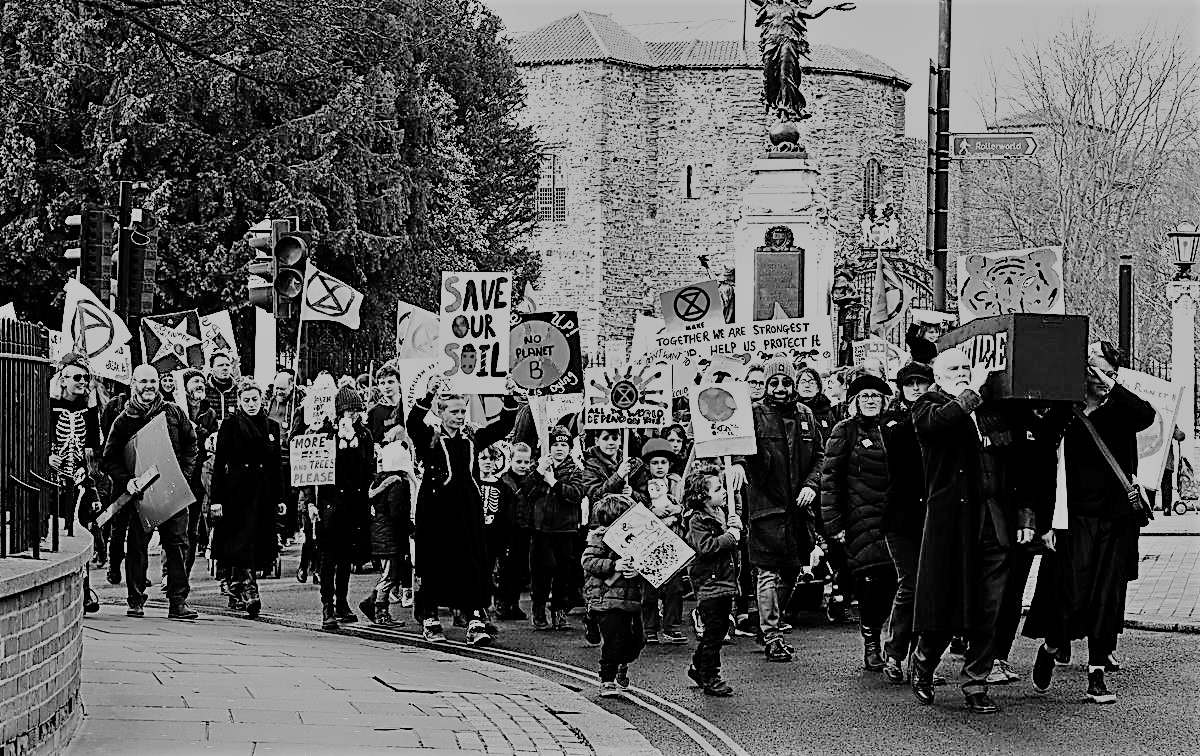